Jim Hanson, back with Kirk and Jim Hiner again to fly another of their homebuilt special-use airplanes__in this case, the Murphy Rebel on amphibious floats. Part 2 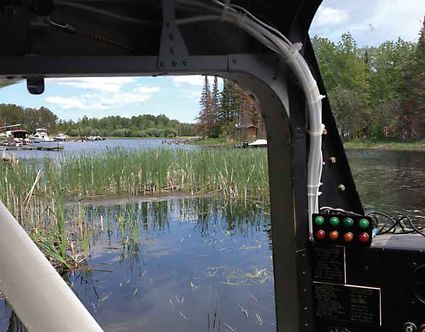 The Rebel at rest in the creek behind Kirk's cabin---Northwest Angle. The simplest floatplane transforms a 1 1/2 hour drive (with two border crossings) into an enjoyable 31 mile flight.

Kirk Hiner keeps a hangar at Warroad, Minnesota. He uses his RV-10 to fly to Warroad at Bonanza speeds, transfers to the Rebel on floats, and flies to the Angle, eliminating the 1 ½ hour drive and the Customs hassle. (Like others, he may be able to fly all the way if the Northwest Angle public airport is ever completed). We were going fishing at the Angle, so I flew to Warroad separately, as Kirk would be staying longer than I would to get the cabin ready for the season (a handy way for me to duck out of the work!) Kirk arrived at Warroad just before sunset. ("Note to self-this will be a glassy-water landing on the water, just at sundown"). I calculated that we had just enough time to fly the 31 miles to the Angle.

We loaded my gear aboard in the huge baggage area, and added enough fuel to bring the airplane up to gross (you can never have enough "stuff" or fuel at a cabin!). I climbed into the right seat-again, thankful for all of the leg and side room) started the engine, and prepared for takeoff. Like most amphibious aircraft, we used differential braking to taxi to the runway. Kirk didn't use any extreme short-field procedure-but we were airborne in well under 1000 feet-on a warm summer evening-at gross weight-on floats-with no wind I didn't get a measure of the rate of climb as we were only climbing to 1000 feet above the water, but it was fairly rapid.

Even though we were in a hurry to get there, I noticed Kirk used only 2100 rpm for cruise-no sense in using higher power for such a short flight with all that drag out there. Still-at 1000' AGL, we were doing about 100 mph. I took the controls for the cruise portion-there was the usual side-to-side wig-wag caused by turbulence-the result of a pendulum effect of the floats located below the aircraft. Not objectionable-MOST floatplanes have it to one extent or another. I noticed that the ailerons were heavy for a light airplane-it flew more like a heavier airplane than an airplane with a gross weight barely higher than a Cessna 150.

Kirk took the controls for the landing. Since the water was glassy, and depth perception difficult, we landed over the top of a weed bed to help gauge the height above touchdown. We were rewarded with the s-s-sss-ssss-SSSSS of a seaplane touchdown-just one of the great pleasures of flying seaplanes. Kirk lowered the water rudder, and we taxied into the boat-crowded creek to his cabin. His neighbor was waiting, and we secured the airplane with the heels of the floats up on the shoreline. What a day it had been!

We fished for the next couple of days, and in typical Northwest Angle fashion, the fish cooperated. The "slot limit" on Walleyes wasn't initially popular when first implemented, but it has really increased the size of the fish caught-the best I have seen in the 49 years I have fished there. All too soon, it was time for us to return to Warroad. We would have a tailwind in taxiing down the creek for takeoff.

We fired up the engine and lowered the water rudders-but the aircraft wouldn't turn downwind (and of course, there are no brakes on a seaplane). We shut down the engine and allowed the aircraft to turn into the wind. Upon immediately deplaning onto the float, the cause was apparent-vegetation picked up as we taxied out had fouled the water rudders. Kirk cleaned it (it was on his side!) and we tried again-this time, no problem.

This is part two in a three-part series on Jim Hanson's Murphy Rebel experience. See the conclusion in the June issue of the Minnesota Flyer.