#327 in an ongoing series by feature writer Jim Hanson 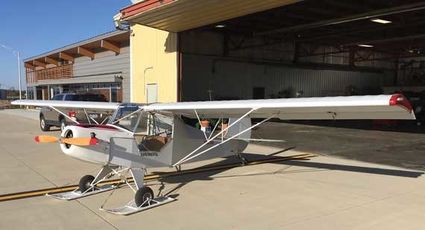 Note the big wide doors on both sides of the Skyraider. You can fly with the windows open, or with the doors off as well. There is plenty of room in the cockpit, even for my 6' 4" and 235 pounds of "rippling muscle"! (laugh)

It's getting harder and harder to find a new type aircraft to fly. I don't count it as flying a unique type unless I do a takeoff or landing-no holding the controls enroute. Doing a takeoff or landing lets me experience nearly the full range of the aircraft handling-on the ground-the takeoff as the wing gathers lift-climb-cruise-glide, and the landing. Some aircraft owners are reluctant to allow someone to make those takeoffs or landings. I need not have worried about this one-it's a single-place aircraft, and I own it!

Larry Olson was the only person to have flown from the Albert Lea airport longer than I have. When he died, I inherited that dubious honor. Larry was a retired machinist, and it showed in everything he owned and operated-they had to be mechanically perfect. Knowing that Larry took care of his machinery, when the family asked for help in disposing of the contents of his hangar, I made an offer for ALL of it-a boat and motor, an SUV, two Honda scooters, several ATVs, and two light airplanes-a Challenger II LSA, and a Skyraider. I sold the Challenger right away, but the Skyraider needed an annual inspection.

The Skyraider design started in the 1990s as a legal Ultralight aircraft. As such, the FARs stipulated certain restrictions-seating for one pilot only, an empty weight of 254# maximum, carry only 5 gallons of gas, a stall speed of less than 27 mph, and a top speed of 64 mph. In return, the FAA didn't require a pilot's certificate, as they didn't even consider it an airplane. Early ultralights were "minimalist" at best to save weight-light aluminum tubing, small engines, single-surface sailcloth covering, and even doing away with "extras" like cockpit enclosures. They were wildly popular, but owners and pilots were looking for "more"-more power, more speed, more climb, and most importantly, more robust structure. Those that were already pilots wanted their ultralights to fly like an airplane. New ultralight designs evolved to meet the market demands, and it wasn't long before ultralights became "Fat Ultralights"-they may LOOK like ultralights, but in truth, they no longer met the letter of the law. As long as owners kept a low profile, the FAA looked the other way, but eventually, they had to do SOMETHING. The result was the Light Sport Aircraft-it produced almost all of what ultralight pilots had been looking for-addressing all of the mentioned restrictions. The LSAs are non- commercial aircraft that can be simply flown for FUN! In return, pilots would have to have an FAA pilot certificate (although with fewer requirements for the medical and pilot certifications).

As Experimental aircraft, we were no longer bound by the strictures of the LSA rules. Across the country, these former Ultralights now sported larger engines, aerodynamic clean-ups, radios, extra fuel tanks, and even comfort amenities like cabin heaters (this IS Minnesota, after all!) We could use any airport. As the builder of the newly-certified Experimental Skyraider, Larry even produced and test-flew a set of wheel-penetration skis-allowing operations from both runways and snow.

The design dates back to 1996, and it WAS a legal ultralight. With the current production of kits and single-engine production aircraft measured in the hundreds per year, it's hard to think of the days when thousands of production aircraft, experimentals, and ultralights were registered. The Skyraider design came from two brothers that had worked at Avid Aircraft (a pioneer in LSA aircraft). They came up with a single-place ultralight version that looked a lot like the Avid Flyer. Dan Denney had been a partner in Avid, going on to start his own company -Kitfox-one of the most popular kit aircraft ever produced. After Skyraider produced a number of kits, they sold fuselages to Kitfox aircraft as the "Kitfox Lite" The company was sold, and the design became the Ridgerunner. Dan Denney, after selling Kitfox, used and sold the design as the SkyStar (and later as Denney Aircraft). The design reached its culmination as the BeLite-though with modern carbon fibre to cut down on weight. (WHEW! Got all that?)

Never mind-they are all based on the same design.

With that common background, the design obviously shares a lot with the Avid and the Kitfox -a taildragger (though it can be built or modified with tri-gear) with a high-lift wing and a variety of engines from 28 to 65 horsepower. The wings fold (just like an Avid or Kitfox) for transport. Unlike early Avids or Kitfoxes, the wing incorporates ailerons and flaps, as opposed to flaperons. Performance depends on the engine-Takeoffs use between 75 and 145 feet of runway. Cruise is between 65 and 95 mph. Climb varies between 600 fpm and 1600. Stall speed is about 30 mph. An extended wing is available for even better short field performance. In short, there is no "average" Skyraider.

This was built using a Rotax 447 that produces 40 horsepower-which seems to be the most popular engine. In keeping with its Ultralight origin, it does not have an electrical system or starter-though they can be added. There is an external pull starter-(just like a snowmobile) -eliminating the need to prop the aircraft.

It has been modified with a 12 gallon fuel tank. With a fuel consumption of 3 gallons per hour of auto gas, it gives 4 hours of range to dry tanks-longer than most people would want to sit in it. Though it will hit 90 mph, a cruise of 70-75 mph is more common. Takeoffs are "short" (just how short really depends on the wind-at my weight of 240 pounds, I'm always off "on the numbers" from our paved airport).

There are doors on both sides, and you can fly with the windows open, or remove one or both doors for summer flying. There is plenty of room in the cockpit-even for my 6'4" height. Flaps on the left-I usually extend them at 45 mph. Brakes are unique-mechanical brakes operated by finger-tip controls on the stick. It's easy-and so effective that I'm going to convert my Kolb to the system. Larry had a hand held radio mounted in the windshield connected to his headset.

The Skyraider "flies just like an airplane." That's one of the biggest compliments you can give -far too many ultralights and homebuilts don't have good control harmony. There is no trim- and no need of it. Controls feel "softer" as you slow down-good "feedback" as to how things are progressing while you are looking outside. Since cruise speed on this kind of airplane is only slightly above landing speed, I find it easiest to simply throttle back for the descent while maintaining "cruise" speed-throttle back some more when the runway is "made"-apply flaps when you get to about 45 mph, and 3-point the aircraft with a little bit of power into the flare. Larry built the aircraft with small tires so he could use them with the wheel-penetration skis-if not using the skis, I would put on bigger tires for "boondocking" and to provide more prop clearance. The Skyraider is designed to accommodate floats as well.

The aircraft only has less than 300 hours total time on it. I'm selling the Skyraider, as I already have a two-place Kitfox and the single-place Kolb (more about the Kolb in a later column). Researching old Skyraider ads showed a kit price in 1996 of $7600-WITHOUT THE ENGINE AND PROP-and you still had to build it! The selling price is firm at that same $7600-and I'll throw in the wheel penetration skis. The aircraft was built by a real craftsman, and you can't get into aviation any cheaper than this!

To see a video of the Skyraider, go to https://www.youtube.com/watch? v=jP8mwHALSGs&feaure=youtu.be

SIDEBAR: WHY SO CHEAP?

A search of Trade-A-Plane shows a number of single-place aircraft for sale under $15,000. Why are these aircraft priced at the same price as a 10-year-old car? Some possible answers:

• THEY ARE SINGLE PLACE. Part of the fun of flying is to share it with others. Some specialty aircraft (like racers and high-performance gliders) are also single-place-but if you want to take someone along, this isn't for you.

• LIMITED UTILITY. Some aircraft like the Skyraider lack cruise speed to make them true traveling machines-though you see a lot of LSAs and Vintage aircraft that have journeyed far to attend Oshkosh every year. For these pilots, it's the EXPERIENCE-not the speed- that counts.

• THEY ARE TAILDRAGGERS. Yes-taildragger pilots are proud of their ability to control the aircraft rather than "drive on/drive off" (to quote 1960s ads by Cessna and Piper)-but many pilots don't want to learn (correction, EARN!) the ability to fly one. Fewer pilots=smaller market=lower price. This can be a GOOD THING if you have the ability to fly one.

• NO HANGAR AVAILABLE. Fabric airplanes don't fare well tied down outside, and aircraft with low stall speeds are vulnerable to winds. This type of aircraft needs to be hangared. The good news is that the wings fold in only 5 minutes. You can trailer it home, or share a hangar with a friend.

• IF IT IS REGISTERED AS AN ULTRALIGHT, YOU CAN'T LOG PILOT IN COMMAND TIME IN IT. Make sure the aircraft has an N-number. The window is closed for registering ultralights as Experimental aircraft. With an N-number, you can log "airplane single-engine land" time, and you can't beat the price!

• INSURANCE-It's hard to find insurance for an ultralight, but as an FAA-certified Experimental aircraft, insurance is available. Side benefit-since there is no passenger liability, and the hull value is so low, insurance is CHEAP!

Unlike most Light Sport aircraft that use flaperons, the Skyraider/Ridge Runner/Kitfox I uses ailerons and flaps for short fields

• EXHILARATING PERFORMANCE-the power-to-weight ratio provides exhilarating performance-short takeoffs, and steep climbs. The low weight and low cruise speeds also mean that the aircraft slow down in a hurry-in the event of an engine failure, you need to get the nose down in a hurry, and they "bleed speed" rapidly in the flare for a slow touchdown. It isn't dangerous-just different-you don't fly your Arrow like an airliner, and you shouldn't fly these aircraft like a Light Sport line a Lance, either.

If you can live with these limitations (and opportunities!) then these light sport aircraft may be for you. You won't get into the air any cheaper!

Jim Hanson has been flying for 56 years and over 30,000 hours. He has owned 499 aircraft t over the years, and brokered about than many more. His 327 unique aircraft types flown place him among the top in the U.S. If you have an unusual aircraft that he may not have flown, contact Jim at his airport office at 507 373 0608, or jimhanson@deskmedia.com