Jim Hanson, back with Kirk and Jim Hiner again to fly another of their homebuilt special-use airplanes-in this case, the Murphy Rebel on amphibious floats. 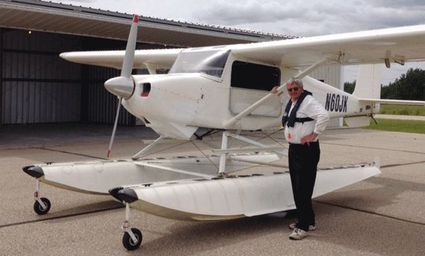 The Rebel is BIG--Here's Jim--at 6' 4" and 255 pounds, next to the Rebel on amphibious floats at the Warroad airport. Jim is wearing a lightweight inflatable life jacket--a good idea for seaplane pilots.

The Hiners had previously built a CH-300-and also completed a set of amphibious floats for it. Like every other floatplane operator, they were always looking for an aircraft with MORE-more range, more cabin room, more baggage room, and more performance. They found what they were looking for in the Rebel. After assurances that the previously-built floats would work on the Rebel, the deal was sealed.

If the Rebel looks vaguely familiar, it may be because the design was partly scaled down from the DeHavilland Beaver (look at the larger Murphy Moose-the resemblance to the Beaver is astounding!). The kit can be built with a variety of engines, from the 912 Rotax to the Lycoming O-235 to the O0320. This airplane has the Lycoming O-320. Gross weights for the Rebel run from 1450 pounds (above the 1320# allowed in Light Sport category) to 1650# (1732# on floats). The higher gross weight of the Lycoming-powered aircraft directly offsets the higher empty weight-all of the aircraft offer a useful load in the 700# range. The Murphy Elite was made for tri-gear OR conventional gear-the beefed up fuselage and wing attach points allow a gross weight of 1800# and engines up to 180 horsepower. Murphy also produces special kits for Light Sport Rebels-designed to give the maximum useful load. 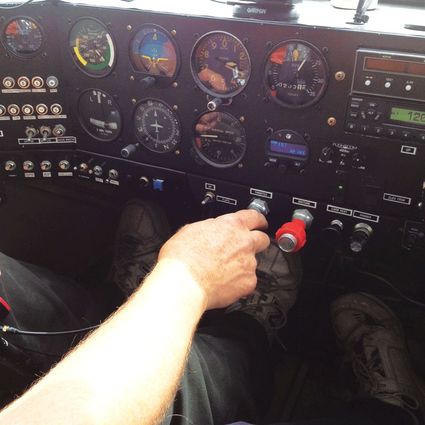 The huge cockpit and panel of the Rebel gives all kind of room. Note the good cruise airspeed, despite only cruising at 2100 rpm--and with floats on!

The aircraft is all-metal, with the exception of fabric covered flaperons. The airfoil is high-lift for slow stall speed, short takeoffs and landing, and high useful load. Accordingly, the drag rise with speed is high-even on wheels and without the drag of floats, cruise speed is not likely to exceed about 125 mph-even with the larger engines. Since this is a UTILITY airplane-to be used to get into and out of remote places (not designed to go fast), Murphy again borrowed from the Beaver's winning formula, and designed an airplane that had a lot of interior room. "HOW BIG IS IT?" you may ask. The cabin is 4" wider than a Cessna Skyhawk. At 6' 4" and 255 pounds, I tend to value extra room. This cockpit is so big that it is one of the few aircraft where I can't reach the rudder pedals if the seat is slid all the way back! In upscaling the aircraft from the original Rebel to accommodate the O-320 engine, Murphy slid the pilot seats back to counterbalance the heavier engine (thank you, Murphy!) The baggage compartment is similarly huge-it was designed to carry up to 200# of cargo (important for a back-country aircraft) or a 3rd seat. Some owners have even turned the aircraft into a camper, capable of holding two people (admittedly snugly) for sleeping in the baggage area/fuselage. Back-country aircraft also need good range to carry enough fuel to go to remote areas and back-the Rebel has 48 gallon tanks-over 6 hours of range.

Jim Hanson’s Murphy Rebel experience to be continued in the May issue of the Minnesota Flyer.