I've been flying for 55 years and 30,000+ hours. I've been privileged to have flown a number of airplanes-production airplanes and homebuilts-ultralights to jets-water-birds and war-birds-gliders and gyrocopters, balloons, antiques, and the Space Shuttle simulator. This is aircraft #324 on my list. (Part one of a two-part article.) 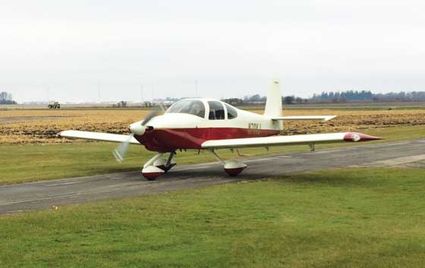 This isn't the first time I've flown the RV-10-but it is the one that counts! I don't count "flying" an aircraft unless I make a takeoff or landing in it-no "holding the wheel in cruise." Making a takeoff or landing lets you experience the aircraft over a wide range of speeds and configurations-different power loadings, and different glide speeds and angles. It gives a measure of aircraft feel-the effects of controls in handling crosswinds, for example. Owner Kirk Hiner and I had flown the RV-10 on an instrument cross country trip to Warroad and return to go fishing on Lake of the Woods. It was actual IFR, and a great way to demonstrate the capabilities of the aircraft., but it didn't allow for much "hands-on" time. I liked it then, and told Kirk I'd like to experience local flying in the aircraft.

The RV-10 is owned by Kirk Hiner, and was built by Kirk and his Dad, Jim. I've previously covered their other airplanes-a Zenith 750 STOL and a Murphy Rebel on amphibious floats-they also built the floats. Sadly, Jim Hiner died this fall-most of us would love to have had the experience of working on projects of interest (like these airplanes) with their father. If you are a homebuilder, get your kids involved-you'll both be the richer for the experience.

The RV-10 looks a lot like a Grumman Tiger-close-faired landing gear, full-swivel nose gear, comparatively short-coupled, and a smallish wing. It could also be compared to a Cirrus SR-20 in those same regards. The difference-the Tiger has a sliding canopy (which means that the interior gets wet when accessing it in the rain) and the Cirrus has doors. The RV-10 has gull-wing overhead doors. Let's get that out of the way right away-it's the ONE thing I like least about the aircraft-getting in and out of it. It wouldn't be bad for people of average height, but I'm 6'4" and 240 pounds-and 70 years old-I just don't bend that way! The process is to lift the door, step over the stick with the foot closest to the center console, step in with the other foot, then sit down. If you are under 6' tall, you won't have a problem. (I guess you COULD SAY that it is easier than getting in and out of a Cub!) Getting into the back seats is no problem-simply step down and sit down. The seats were very comfortable once seated (Kirk mentions that Van's had famed seat producer Oregon Aero build the seats on the RV-10-their first 4-place airplane-then designed the rest of the aircraft around them!). Once seated in either front or back seats, there is plenty of legroom-even for me. Visibility is great, and there is a lot of headroom-a function of the rollover safety structure. I noticed that the overhead seemed especially robust-"Roll-over protection" replied Kirk. "It's something lacking in so many canopy-type aircraft." Those gull-wing doors have a latching system reminiscent of a bank vault-they seal very well, and have a safety latch built-in.

The engine in this airplane is a Lycoming IO-540 producing 260 horsepower to the constant-speed prop. Smaller engines are available. I asked Kirk what size tanks it takes to feed that engine. He replied "We have 60 gallon tanks. It burns 15 gallons per hour, even at the highest cruise settings. That gives us 720 miles of range plus an hour's reserve, even at high cruise settings (Van's specs say 1000 miles at lower power settings). I asked about useful load. "This is a 'no-compromise' airplane. We have 1200 pounds of useful load, so even with full fuel, we can put 840 pounds in the cabin."

I noticed that there was an oxygen bottle built in between the rear seats. Kirk explained "This airplane has a service ceiling of 20,000 feet, and an initial rate of climb of 1450 feet per minute, even at max gross weight-it doesn't take long to get to altitude."

I told Kirk I was comfortable flying from either seat-and the aircraft is equipped with dual brakes-needed to taxi an airplane with a full-castoring nose wheel. Perhaps because of a 40-degree crosswind gusting to 24 knots, he elected to fly the left seat. We fired up the fuel-injected Lycoming, and while the radios were coming online, the first thing I noticed was a flashing red light on one of the panels. I asked him about it-it was from the Engine Information System (EIS)-warning that one or more of the pre-programmed parameters was out of tolerance-in this case, it was engine oil and cylinder head temperatures. The light extinguished as temperatures came within specs. The unit also monitors manifold pressure and RPM, ammeter and voltage, CHT and EGT, (and differential between cylinders) as well. Really impressive-more airplanes should have it.

After the runup, Kirk suggested we taxi on the runway to the departure end. Sly dog that he is, I'm sure he was monitoring my ability to taxi an airplane with a free-castoring nose wheel (you steer with the brakes) to see if I was going to have any problems with the takeoff. I've flown a lot of airplanes requiring brake steering-the airplane ran straight and true. On takeoff, he suggested getting taking the pressure off the nose wheel, starting rotation at about 50, and making the initial climb at 90. The RV easily handled the crosswind, and accelerated and climbed rapidly. I noticed that the ailerons were light and the rudder was effective in the crosswind, but the elevator was stiff. I toggled the electric elevator trim on top of the stick, but found the elevators still stiff-not objectionable, but heavier than the other controls. My guess is that it may have something to do with the fact that the RV-10 has a rather short fuselage and the desire by the designers to provide a wide CG range. In any case, unlike many of the RV series aircraft, the RV-10 is not an aerobatic aircraft-cross-country and IFR stability are prized for its intended mission. ALL Van's aircraft have excellent handling characteristics-leading many pilots to mention "the RV grin!" when flying them. This one did not disappoint! 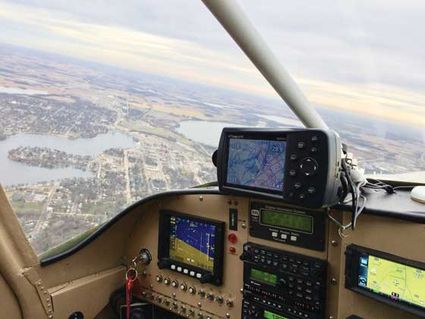 Note the great visibility from the cockpit!.

Our original plan was to go to Rochester for some pattern work as the wind was right down the runway. When we initially started the airplane, the ceiling was listed as 1300 feet-by the time we got done with the runup, it was 1100 feet, and by the time we started the takeoff, it was 900 feet. By the time I turned crosswind after takeoff at 400 feet above ground level (about 20 seconds with our 1500 feet per minute climb rate!) we found ourselves losing ground contact at 500 feet! I immediately turned downwind-we would have to return. We lowered approach flaps and waited 10 seconds due to the strong tailwind before turning base leg, then dropping the rest of the flaps. Kirk advised holding 80 on final with the gusting crosswind, and I had no problem holding the center line. We were rewarded with a squeaker landing, and only after landing did we notice that the 24 knot crosswind was now 60 degrees off the runway heading. That's great crosswind handling! The rest of the flight check would have to wait for another day!