Jim Hanson, back with Kirk and Jim Hiner again to fly another of their homebuilt special use airplanes - in this case, the Murphy Rebel on amphibious floats. Final article in a three-part series beginning in April. 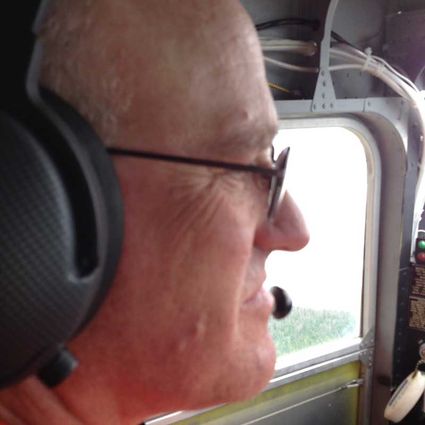 Kirk Hiner--co-builder of the Rebel.

After pre-takeoff checks, we started the takeoff. The aircraft just didn't want to get "on the step" of the floats-we were half-plowing-half step-taxiing. We aborted the takeoff to check for anything amiss-then tried it again. This time, we were able to get on the step-but the takeoff run was way long. Airborne, we flew to Warroad. I flew the entire way, and the aircraft felt normal. Kirk was OK with my making the landing at the Warroad airport-and the landing was good (most amphibian landings ARE good-perhaps a combination of the trailing-beam landing gear and the stability of 4 wheels). After putting the aircraft in the hangar, we elected to check the floats for water. Even though the aircraft had been heeled up on the shore at the Angle, one of the front compartments had a considerable amount of water in it-accounting for the sluggishness of getting on the step and taking off. Kirk mentioned that in all of the years he has flown the aircraft, there had never been a problem with water in that compartment before-perhaps it was a result of the unusual nose-low attitude of the aircraft while it was heeled up on the beach.

Super Cub or Citabria-the Rebel has much more interior room (for people AND for baggage) with slightly faster cruise speeds. Takeoff is about the same as a Citabria, only slightly longer than a Super Cub. It also offers side-by-side seating-and the option of a 3rd seat.

Maule-Comparable performance to the lower horsepower Maules for takeoff-perhaps slightly slower in cruise. It does have metal construction compared to the fabric covering on Maules (for better or for worse). Cockpit is larger.

Cessna 170/172-Removing the back seat from a 172 would give the same baggage area, but the cabin width goes to the Rebel. Takeoff performance goes to the Rebel, but cruise speed is slightly higher for the 172.

Price-the kit price on the airplane is about $25,000 today. Add in the engine, prop, interior, and instruments/avionics, and the cost will be over $50,000-and you still have to build it. That price is comparable to the aircraft listed above-it is not cheaper, but it IS a specialty airplane.

The Rebel would appeal to someone with the need or desire for a utility bush airplane. A plus for the Rebel would be the ability to work on it yourself. An increasing attraction for an experimental aircraft is the ability to use non-FAA certified avionics-they are much more inexpensive than certified units. Case in point-this aircraft has a full Tru-Trak autopilot with altitude hold-something not available to older certified aircraft at ANY price. 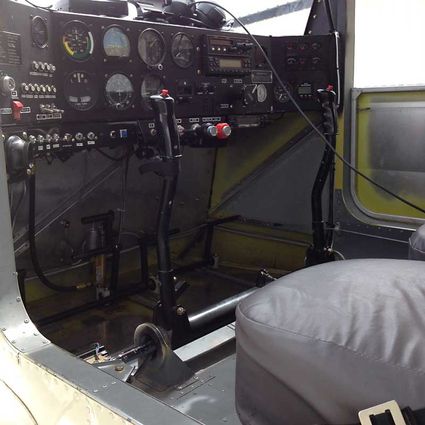 For big people like Kirk and me, ROOM in the airplane takes on an entire new importance!

An important consideration for any kit-built aircraft is the record of the kit manufacturer. Murphy has been in business for over 30 years, and has been producing Rebel kits for over 20 of those years. They have sold well over 1000 kits-with a high proportion of those kits already finished. The design is "mature"-almost all of the "bugs" have been worked out. Kirk Hiner was very satisfied with the kit-the instructions-and the product support-but remember, the Hiners are experienced builders.

Thank you, Kirk-for a chance to fly your airplane-and for an enjoyable trip to Minnesota's unique Northwest Angle-a chance to "fish Canada" without actually leaving the country!

Jim Hanson is the long-time operator of the Albert Lea airport. Jim rarely finds an airplane he doesn't like-Like Jim himself, they all have their good and bad points. Jim looks forward to flying aircraft he hasn't flown before. If you have an aircraft that Jim may not have flown before, contact him at his airport office at 507 373 0608, or jimhanson@deskmedia.com