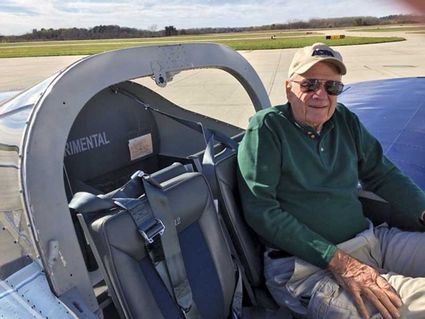 This is #325 in unique airplane types I've flown. As popular as the Van's RV-series airplanes are among homebuilders, I've never actually logged PIC time in them-though I've flown them, I don't count it unless I make a takeoff or landing in the aircraft-no "holding the controls" while aloft.

For this story, friend "Sonny" Martin and wife Barb brought their RV-12 to Albert Lea. Though both Sonny and Barb are retired IBM-ers, many readers will recognize Sonny as the lead tech of the former RC Avionics radio shop at Rochester, Minnesota. They previously flew a nice Cessna 182-and as you might imagine from a radio shop guy, it was all tricked out with the latest avionics.

Sonny and Barb were looking for the right aircraft to take into retirement. They recognized that they fly mainly for fun-that there is usually just the two of them on board-that their trips are usually shorter than 300 miles. They wanted an economical and simple aircraft-one that would be both fun to fly NOW-AND simple to fly as they got older. They wanted low fuel consumption plus reasonable speed, and fixed landing gear to keep insurance costs down. Though flying IFR was no longer a big consideration, they wanted the latest technology (including an autopilot) for their VFR flying. Since the sale of the Skylane would pretty much fund the new airplane, they wanted to keep the cost under $100,000. After considering all of the used airplanes out there, they finally settled on the popular Vans RV-12-but they would have to build it.

It's true-you CAN purchase a completed factory RV-12-Van's sells kits to a company that will put it together for you (legal for a Light Sport certified airplane, but not for an ordinary experimental, where you have to do 51% of the construction operations). That would raise the price considerably-and besides, Sonny was looking for something to do with his new-found retirement. Like most first-time builders, they asked themselves-"Are we up to this?"

Though he regularly worked on airplanes, Sonny had never built an aircraft. He did feel competent to do minor sheet metal, however. After consulting with other RV builders, his confidence was bolstered by the reports of the excellent workmanship of the Van's organization. "Everybody told me about Van's excellent customer support" Sonny said-"and they were right! The pre-drilling of the skins, the excellent step-by step construction manuals, and the product support were outstanding." Sonny was convinced, but Barb was still working at the time. "My contribution to the building process was to write the checks" she said-but Sonny did say that she was all for the project. On Mar. 21, 2011, they ordered the kit.

A friend, Leon Ernster, had room in his heated hangar for a small airplane project (Leon is building a Murphy Moose). Having a heated shop is an absolute requirement in Minnesota, and the ability to have a second set of hands when needed was good for both builders-not to mention the "moral support." Like most successful builders, Sonny set a goal for budgeting regular time for the project. "Van's said it would take about 800 hours to build-I did it in about 820 hours" Sonny explained. "I set a goal to work on it 5 hours a day-25 hours a week. With the inevitable time conflicts that arise with any project, I still finished it in 14 months of work time".

I asked him what the most difficult part of the build was. He replied "Adjusting the prop pitch on the ground adjustable prop, and synchronizing the dual carburetors".

When building most homebuilt aircraft, the FAA requires 40 hours of testing in the local area before passengers can be carried. With a factory kit Light Sport Aircraft, however, only 5 hours of test time is required-provided that the aircraft is built EXACTLY to factory spec-no modifica-tions allowed. Noted RV expert Tom Bergy made the first flight on July 6, 2012, and pronounced that it flew well. After the prescribed 5 hours of designated flight checks by Bergy, Sonny boarded the aircraft to fly his creation himself for the first time, as Bergy conducted the mandated instruction time for the insurance. The aircraft has flown virtually trouble-free ever since.

I've known Sonny and Barb for years. When they brought the RV-12 to Albert Lea, he tossed me the keys and said "go fly!" Making the first flight solo is not something I usually do on a check flight-especially in an Experimental aircraft. There are enough variables in homebuilt aircraft-engine, construction, weight and balance, avionics, etc. to make every airplane unique. (Besides, this isn't just an airplane, this is a creation-an airplane into which the builder has poured months of time). I voiced my concerns, and Sonny replied "Almost all RV-12s are built to exactly the same specs-including this one. You're familiar with the operation of the Rotax engine. You're familiar with castering nose wheel steering. It's an airplane-go fly!"

We walked out to the airplane, where Sonny adjusted the seat back for me (I'm 6' 4"), and showed me how to close the canopy, as I buckled into the 5-part harness (unlike other models of the RV series, the RV-12 is not designed for aerobatics, but it uses the standard RV aerobatic harness). His parting words were "here's the master switch, here are the ignition switches-the lights and radios are on-turn the key to start-go fly!"

I considered using the choke (yes, the Rotax uses a choke for cold starts) but since the engine was fairly warm, decided I wouldn't need it. Switches on-clear prop, turn the key, and the engine fired up right away. The Dynon screen came up within seconds, and I spent a couple of minutes familiarizing myself with the location of aircraft and engine information as the engine warmed up. I was surprised to see that this display incorporated synthetic vision. I taxied forward, and found no problem in steering with the brakes (though as the owner of a Lake Amphibian with a similar setup, I've found that some first-timers without experience with castering nose wheels may need some practice). By the time I got to the end of the runway, all pressures and temperatures were in the green-pre-takeoff checks accomplished, radios set-TIME TO FLY!

As I made my radio call and rolled out out onto the active runway, I noticed the runway was displayed on the Dynon in amazing detail-including the centerline and runway number "35". There was a 12 knot crosswind component, so stick to the left (you fly the RV-12 with the stick in your left hand-some people consider that an issue, but after a couple of hours, you never think about it again). A little brake was required for the first second or two due to the cross wind-a little back pressure, and the aircraft flew off at about 50 after a takeoff roll of perhaps 500 feet (we were about 210 pounds under the 1320 pound LSA gross weight with almost the full 20 gallons of fuel on board, plus my "260 pounds of rippling muscle"). With the wind and warm day, there was plenty of chop in the air, and like most new RV pilots, I tended to over control in roll initially, but soon adjusted. The aircraft quickly accelerated to 80 knots, and climb settled down to about 750 feet per minute. I experimented with 70 knots in the climb to 4000 feet, and found that the aircraft would deliver 950 fpm climb.

At altitude, I let the aircraft accelerate, then throttled back to 5200 rpm for cruise. Through the magic of the true airspeed reading on the Dynon, that comes out to 118 knots true airspeed-just under the 120 knot maximum allowed for LSA aircraft. I did steep turns left and right, enjoying the light control feel and the superb visibility (for me, the cockpit canopy comes down to just above waist level). Some highly wing-loaded aircraft tend to lose speed quickly in steep turns and the G's build up, but the RV-12 only lost about 5 knots-something I could easily have regained with the application of power. I tried slow flight-the RV seemed to take a long time to slow down until speed got below 60, then slowed faster. Through the speed range, elevator stick forces remained light. Though they could easily have been trimmed away using the panel-mounted electric trim, I elected not to so I could assess the stick forces through the wide speed range. (Though I initially didn't like the panel-mounted electric trim, I eventually found it quite normal). There was little pitch change with flap selection. I slowed to the stall voice annunciation and burble-no surprises there, either.

Returning for a series of landings, I applied flaps after reaching the 82 knot maximum speed. I found the flaps didn't add a lot of drag-it took a fair amount of time to slow to the 60 knots recommended for the approach. Taking this cue for flap effectiveness, I lengthened out the pat-tern-for a short-winged aircraft, it doesn't come down steeply. With the crosswind gusting through the trees, I reminded myself not to over control. Like many short-fuselage aircraft, there was some tail-wagging, but not enough to be a problem. The landing was good, and I could easily have been stopped in about 1200 feet on this first attempt. The second takeoff and landing was a repeat of the first-and I was confident enough in the airplane to move to the shorter cross runway-this would give a quartering right crosswind. I elected to try a short-field effort, so selected flaps. At about 30 knots, I started the rotation-breaking ground after 350 feet. This time, I needed full right aileron-a reminder that unlike the rest of the RV series, the RV-12 uses full-span flaperons. Like other aircraft equipped with flaperons (or even interconnected ailerons and flaps, like the Robertson STOL mods)-roll effectiveness is diminished with flap deployment. I took this into account for the landing-another good one. Though not a maximum short-field effort, I easily made the 575' turnoff to the crossing taxiway.

Grateful for this enjoyable flight, I taxied the RV over to the fuel pump to fill it up for Sonny in return for his letting me enjoy his airplane. It took all of 4.9 gallons of auto fuel (the Rotax 912 is designed for auto fuel-with or without ethanol-using 100LL cuts the oil change interval in half). The 26 minutes from Rochester to Albert Lea and the 32 minutes of my flight (the Dynon logs in-flight time only) plus the ground time took only 4.9 gallons total-less than 5 gallons per hour. That's hard to beat efficiency! 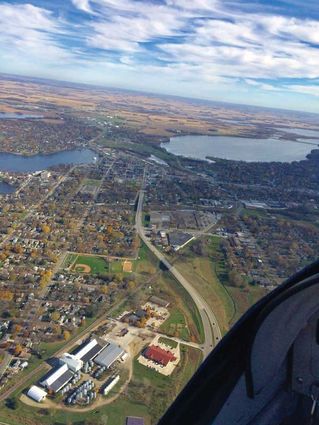 The low cockpit sills make the view outside almost helicopter-like!

I enjoy almost every "first flight", but this one was somehow "different." Reflecting later, I believe that it was partly due to the flight characteristics of the aircraft-partly because of the enjoyment of the Dynon flight and engine display (I didn't try the altitude-holding autopilot, as I was having so much fun hand-flying!)-partly because this was such an economical and efficient aircraft-and partly because for the first time in a long time, I was able to discover the flight characteristics of a new airplane by myself-it was almost like a first solo flight!

Jim Hanson is the long-time operator at the Albert Lea airport. Now in his 55th year of flying 335 unique models of aircraft (including jets, seaplanes, gliders, helicopters, balloons, and ultralights), you would think that Jim would be hard to get excited about an airplane. Obviously, that is not the case. If you have an airplane that Jim may not have flown before, contact him at 507 373 0608, or