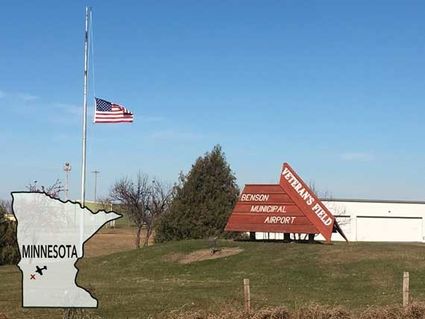 Before the arrival of Europeans, the Dakota and Ojibwa frequently disputed who got to use the area around what is now the City of Benson in Swift County. A particularly gruesome chapter in that conflict occurred where the Chippewa River is joined by its East Branch. That's why the recreational area at the confluence is now called "Ambush Park." Not to worry, these days it's a perfectly delightful spot and you won't be bushwhacked while you camp or hike. On the other bank of the River is a great golf course, and just across the highway is the town's first-class airport.

Benson Municipal Airport is as close as it gets to a perfect place for General Aviation. The 4000-foot-long runway will accommodate most of the fleet including those that weigh as much as 50 thousand pounds. All the modern lighting systems are in place.

A full parallel taxiway expedites traffic and the apron area has plenty of parking space for transient aircraft. GPS can be used for an instrument approach or if you happen to have the last aircraft with the equipment, an ADF procedure is available. The automated weather system (AWOS/ASOS) broadcasts what's happening. An FBO offers full service maintenance. Fuel is available 24/7 as are the facilities in the Arrival/Departure Building.

If you're a charter or corporate pilot who likes to have a run while you wait for your passengers, the building's shower facilities are just the thing. Those taking advantage of the under-wing camping privileges might like that too.

If you'd prefer a bed with clean sheets, there are hotels within two miles of the airport. Several good eating places are nearby too. Public transportation is available to get you to town.

Citizens of Benson like to celebrate. There's the Pioneer Land Marching Band Festival in June (on Flag Day) and a Fly-In/Car Show on the third Sunday in July. Other events include Syttende Mai in May (ask a Norwegian what that's all about), and Farmer's Market Day in September.

If you're there on a less auspicious day, you can visit the Swift County Museum or one of the other local parks. If dog is your copilot, Benson has a park just for canines.

The City is also a leader in the use of alternative energy. It's the home of the first biomass power plant in the US, and a major ethanol production facility.

Aviation activity in Benson goes back to 1928. That year Will Rogers made a much-publicized request that "every city place its name on some building clearly visible to aviators flying overhead." The local American Legion Post was already working to establish a public airport, and the members painted "Benson" on the roof of the armory. Pilots would know where they were (or maybe just the name of the town they were over?). The letters were 8 feet high, with an arrow pointing north. Another arrow pointed the way to the nearest airport, which at the time was a private field northwest of town. Later, the Legionnaires arranged for the roof to be lighted.

By the late 1930s a flying field was in operation at the current site. A long series of improvements led to the configuration it has today. The last big project started in 1986 and included a runway extension and the parallel taxiway. That culminated with a ceremony on August 13, 1988. Breakfast and an air-show accompanied the usual speeches. Appropriately the Benson Airport was dedicated as Veteran's Field.

In the 21st Century, Benson Airport is a pretty busy place. It's home to 15 aircraft of various types and hosts 20 arrivals and departures on an average day.

If you own a Mooney, you probably know about Jed-Aire Aviation who are specialist in servicing that type of flying machine.

This is farm county, and it takes a lot of corn to keep an ethanol plant going. That in turn keeps the local agricultural operator busy.

Benson Air Ag has been owned by the same family for 50 years and currently operates three turbine airplanes that effectively triple the average for daily operations when things are busy.

Getting to Benson couldn't be easier. It's centrally located, and the identifier is easy to remember. Some how Benson Municipal Airport got KBBB, so put that in your GPS and go fly there.