Airport of the Month Project Spotlight 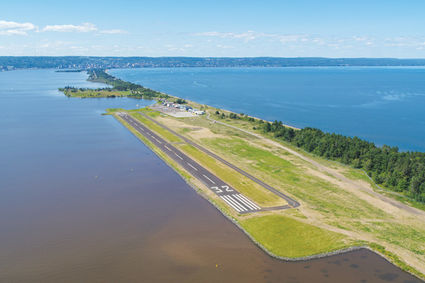 Photo courtesy of SEH, with the approval of the DAA

The new runway at Sky Harbor right after it opened.

Park Point is one cool place. It's the world's longest freshwater sand spit and separates the Duluth Harbor from the rest of Lake Superior. Since the lake's water is usually about 45 degrees, nature supplies the air conditioning. At the northwest end is the famous lift bridge and Canal Park, the Duluth entertainment and tourist district. On the southeast end is an 18-acre old growth red and white pine forest with a kind of spiritual ambiance. One of the City's most desirable residential areas begins just off the bridge and ends at a city park. Between the park and the forest is the Duluth/Sky Harbor Airport.

Sky Harbor is an important facility. It belongs to the Duluth Airport Authority (DAA). Facilities include a paved and lighted runway, plus a seaplane base. Helping to relieve the Duluth International Airport of general aviation traffic Sky Harbor houses 29 aircraft and hosts 13,500 annual operations. U.S. Customs are available. The seaplane base has a launch ramp and dock. Some thriving businesses do general aircraft maintenance and conversion of float planes to wheels or vice-versa. Small aircraft charters and site seeing tours are also offered. The airport is convenient to downtown. There's bus service to the park. A courtesy car is available, or there's free bicycles for the fit and ambitious.

Founded in 1939 as a seaplane base, Sky Harbor got a runway in 1954. Pilots landing on wheels to the northwest have always been challenged by the pine forest. The trees were later classified as "obstructions" resulting in lights on poles to mark them and the runway threshold being displaced, but that was a temporary solution. In 2007 DAA initiated a planning process to determine the airport's future.

Short-Elliot-Hendrickson (SEH) was selected to assist the DAA staff with the Sky Harbor project. At first many Park Point residents wanted the airport closed, but folks from either the Authority or SEH attended all the neighborhood club meetings to keep them informed and get some feedback. By the end of the process, they were pretty much in favor of the Airport. Alternatives were studied including closing the airport, cutting the trees, new runway alignments, and relocating the airport.

The list of government agencies that have a say in airport planning is nearly endless, and their opinions ranged from "cut the trees" to "do nothing." A consensus was finally reached where the runway would be realigned. This would involve filling seven acres of the harbor, but the forest would be preserved as would protected grass species growing on the local sand dunes. To mitigate the environmental impacts, vegetation that might be disturbed was removed to a greenhouse for later replanting. "Fish Cribs" were built in the harbor and many other measures taken to assure minimal damage to a unique ecosystem.

Geotechnical engineers get excited about the word "surcharge." It doesn't mean paying more money, although it can get expensive. Basically, fill for construction is consolidated by placing more fill on top then removing the "surcharge," which is also called "overburden" once consolidation has been completed. Who says engineers don't have a way with words? For the Sky Harbor runway, the overburden was in place for a year and the consolidation carefully measured to make sure future settlement would be minimal.

Dredged material from the harbor was used for the fill and riprap placed to eliminate erosion. Almost all the materials including those for paving were brought to the site by barge, keeping construction traffic out of the residential and commercial areas. Careful planning of the construction work limited the time the airport was closed to only 30 days, although the entire construction process took three years. The new runway opened on June 15, 2020.

Sky Harbor Airport is a success story about how the needs of the neighbors and concern for the environment can be balanced against aviation safety and airport utility. It deserves more than a few hundred words in a magazine article.

Project details fill many volumes of environmental documents, engineering reports and construction diaries. Those official publications comprise thousands of pages of fascinating information that could no doubt make many pleasant hours of reading.

Not your idea of a good bedtime story? Duluth author Marie Zhuikov has woven the tale of Sky Harbor and the old growth forest into a romance novel called "Plover Landing." Instead of fish cribs and surcharge, Ms. Zhuikov's story line is about an ecologist working to restore habitat for the piping plover on the Lake Superior shore. The protagonist's concentration is disrupted by the return of her former lover whose been gone for 12 years, during which he spent some time as a werewolf. Probably not the sort of tale you'd expect to find in an environmental assessment.