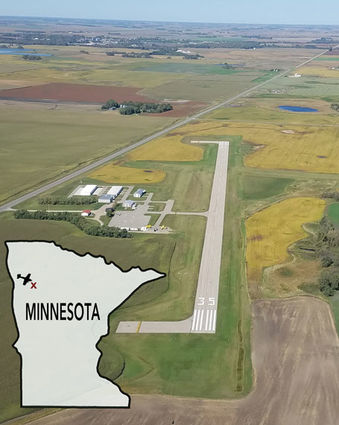 Like to see stage shows and maybe play a little "blackjack?" How about staying in a nice hotel, having some good meals and getting away for a few days? You could get an airline ticket to Las Vegas then enjoy a 45-minute wait in the TSA line so you can take a seat without enough leg room. After that you get to stand in line again for a rental car and walk a couple miles to where it's parked. Later you can do it all over again to get home. A private jet with a limo at the other end would be nice for that trip. If you don't have the big bucks, get out the Cessna and fly to Mahnomen County Airport. When you get there, relax for a few minutes in the nice new Arrival/Departure Building until the shuttle from the Shooting Star Casino arrives for the 4-mile ride to a good time.

Mahnomen County has a first-class airport. Besides the A/D building there's plenty of aircraft parking and self-service fueling. The main runway is paved, lighted and 3,400 feet long. For nights and low visibility, it's equipped with Runway End Identifier Lights and Approach Path Indicators. RNAV approaches are in place to both ends of the runway and the automated weather station will tell you when to use them. The tail draggers and ski fliers will like the 2,700-foot turf runway.

Twenty-eight aircraft call Mahnomen home and a busy agricultural applicator is on the field.

For destinations other than the casino, a courtesy car is available. Lots of resorts and two hotels also offer lodging plus there's good food at many locations. Underwing camping is an alternative for those who like to "rough it."

Shooting Star is operated by the White Earth Ojibwe. Mahnomen is the only Minnesota county that is entirely within a Reservation. The name roughly translates into "Wild Rice." Mahnomen is also the name of the County seat which is conveniently located on the banks of the Wild Rice River.

"Savanna" describes a mixed ecosystem with trees and grassland. It supports a wide variety of native species and is good grazing for domestic animals like cattle and sheep. Mahnomen is unique among Minnesota Counties by having large areas of savanna as opposed to prairie or forest. Many of these are preserved in their natural state. There are a dozen wildlife management areas in the county that offer some unique bird watching and hiking.

In the early 1900s many citizens of the eastern half of Norman County were not satisfied with things. The County seat was too far away and they were not being properly served. To remedy that, they "seceded," and Mahnomen County was incorporated in 1906. The City got started about two years earlier and became the county seat.

Fifty years later the County saw a need for access to aviation and opened their first airport. For a while the single turf runway was adequate but improved General Aviation aircraft need better facilities. The original site didn't have the space required to expand so the airport was moved to its current location in 1974. A second runway was added in 2007 and the main runway was paved in 2009.

Mahnomen is the hometown of General Clayton Isaacson. During World War II Isaacson flew an incredible 210 combat missions. He started out in bombers before transferring to a fighter squadron and becoming an "Ace." General Isaacson later served in Korea where he flew another 123 missions. Apparently, he hadn't seen enough action in two wars. When he was a Colonel, Isaacson did parachute training with the U.S. Army. He made his first combat jump at the age of 44 with the Belgian Parachute Regiment during the 1964 hostage rescue in the Congo. He's best known in Minnesota aviation circles as commander of the 23rd Air Division when it was headquartered in Duluth. He died in 1996 and is buried in the Arlington National Cemetery. General Isaacson was a 2000 inductee of the Minnesota Aviation Hall of Fame.

Clayton Isaacson traveled all over the world during his military career but this is what he called home. Other pilots would surely like it there too.

Mahnomen County is a great place with an excellent Airport.