Airport Of The Month – Mora 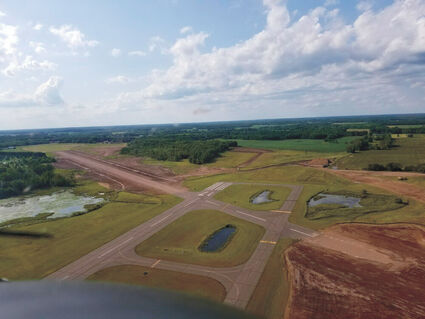 Runway 11/29 construction underway at Mora Municipal Airport. Earlier statistical analysis showed that Runway 17/35 at Mora did not have the coverage needed, but with a new Runway 11/29 the wind would be acceptable 100% of the time.

Swedes are famous for being persistent. That's a trait that comes in handy with airports and revolutions. Emigrants from Sweden were the earliest settlers around Mora, Minnesota. Folks there are proud of their heritage.

Downtown has a large statue of a "Dalecarlian" horse and other flavors of the "old country."

Mora Municipal Airport was established right after World War II replacing a "flying field" at a different location. At first there was a single north/south turf runway.

In 1956 a second turf runway was established with a northwest-southeast alignment which pretty much made crosswi...