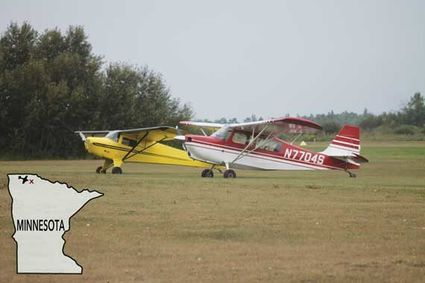 Planes parked at Grygla Municipal Airport during one of their recent Fly-Ins.

Grygla is "The Biggest Town of Its Size." It must be true, the slogan is on the city website and letterhead. It's also true of the Grygla Municipal Airport. Between the small-town ambiance and the well-maintained airport, Grygla is a great destination.

Located within walking distance of just about anything in Town, the airport has a 3400-foot-long lighted turf runway. A rotating beacon will help you find the place at night. There's a generous aircraft parking area, which is right next to the city park and campground. Bathrooms, showers and picnic facilities are available in the park. "Underwing" camping is encouraged making this the ideal destination for a fly-in/camp-out weekend, or maybe just a picnic. If you don't want to bunk with your airplane, more civilized sleeping arrangements are available less than three quarters of a mile from the parking area. If you're on a $100 hamburger run, there's two good eating places within easy walking distance.

For those who like more formal events, the Lions Club hosts a fly-in every year on the last Sunday before Labor Day. That's also the weekend of Grygla's community celebration called the "Fall Festival". The Festival includes food, drink, music, dancing and a parade. There's also a show of motorized vehicles featuring cars, tractors and snowmobiles.

In June of 1898, A.O. Fladeland and Ole Newton opened a store in town's first location. A post office was added, and surveyor Frank Grygla gave his name to the town. He was he son of a Polish Count named Gryglazewski but thankfully had shortened the name when he arrived in the US. By 1904 Grygla included four main buildings, but the site was too wet, and the residents decided to move to higher ground. Besides the store there was a blacksmith's shop, hotel and school house. All four were picked up and moved to the site of the current city, no small feat without hydraulics or trucks. Almost a century later the City opened the airport. August 25, 2002 was the official dedication of Mel Wilkens Field.

When Mr. Wilkens learned to fly in 1950, small airplanes weren't seen very often in rural Marshall County. Shortly after getting his pilot's license, Mel bought a Taylorcraft. He soon had a landing strip and hangar on his farm near Grygla, where Sunday afternoons featured airplane rides for the area's residents. Besides farming, Wilkens was an equipment operator for the County. It wouldn't happen today, but a lot of local school children got to ride on his grader while he was maintaining their roads. Mel Wilkens passed away before the airport was open but had already been told by the City they would name it after him.

Airport construction is never easy. Building an entirely new publicly owed airport is especially challenging, and nobody in Minnesota had done it for a long time. Undaunted, Grygla started the process in 1991. A committee was appointed, and the site selected. Site approval from the State and Federal authorities came soon, but there was more. Land and easements had to be acquired. Environmental concerns and wetland impacts were addressed. After building the necessary mountain of paperwork, the City was ready to start construction. More delays involved weather and issues with construction materials, but it finally got done. All the initial grading and site preparation work was done by volunteer labor using donated machinery. After all that work, the dedication was a big celebration. All Mel Wilkens children and grand children attended. Speeches were made, and live music entertained the crowd. The airport hosted its first fly-in and the City provided a free lunch.

Grygla boasts that it's a full-service town. The commercial district has all the necessities from hardware to hair styling. It's on kind of a border between the "big woods" and the "great plains". Agriculture and forest products dominate the local economy, but it's also a good place to visit if you like the outdoors. There are two major wild life refuges in the neighborhood and a well-maintained trail system.

So next time you want to fly someplace interesting, try a trip to the "Biggest Town of its Size", and its neat little airport.