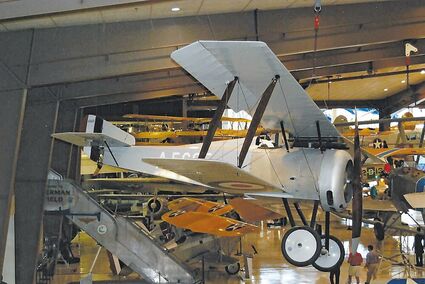 During WWI, artillery spotting was of prime importance. Both sides used tethered observation balloons. Stopping your opponent's ability to chart your positions was one of the most dangerous jobs for fighter pilots. The German drachens were not armed, but the hydrogen filled gas bags were surrounded by anti-aircraft guns (which the British called "Archie") and protected by fighters.

The most successful ace against the drachens was Belgian pilot Willy Coppens (1892-1986), who shot down 35 balloons and two aircraft, most while flying the French Hanriot HD-1. His autobiography, Flying in Flanders, was published in 1971. America's leading balloon ace was SPAD pilot Frank Luke (1897-1918) with 14 balloons out of 18 totals kills.

Designed by Pierre Dupont, and known for its agility and pleasant handling characteristics, the HD-1 was rejected by the French in favor of the SPAD, but became popular for its strength, rate of climb, and high service ceiling with the Italian and Belgian air forces. Powered by a 120 hp Le Rhône rotary, the HD-1 had a maximum speed of 114 mph, a service ceiling of over 20,000 feet, and carried a single Vickers machine gun. Hanriot, which had produced Sopwith 1 ½ Strutters under license for France, built 125 HD-1s for Belgium and the Italian Nieuport-Macchi company made 831 at its Varese factory.

Although limited to one Vickers gun due to weight, Belgian and Italian pilots, who favored maneuverability, used the Hanriot to great effect. At the Armistice on 11 November 1918, 16 of 18 Italian fighter squadrons flew the HD-1. Leading Italian aces who flew the Hanriot included Silvio Scaroni, Mario Fucini, and Gastoni Novelli. Post-war, the Hanriot continued in service with Italy, Belgium, Switzerland, and a small number of former HD-2 floatplanes, converted to landplanes, served with the U.S. Navy.

Five original Hanriot HD-1 fighters exist today, with examples in Belgium, Italy, Switzerland, New Zealand (airworthy as ZK-EAY), and in Chino, California, with Planes of Fame. The aircraft in this 2010 photo taken at Pensacola is a

reproduction with an original Le Rhône rotary engine. It is painted as "A5625" that was used for tests flying off battleship platforms after WWI. The original A5625 was struck off charge on 26 February 1920.

The Hanriot HD-1 proved a tough one. Only regular Dave Lundgren scored this month. Brief well before flying. Blue skies and tail winds!