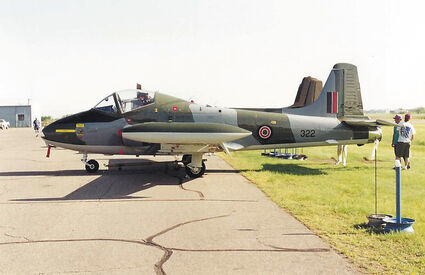 The Hunting Jet Provost series was designed to replace the 550 hp Alvis Leonides radial engine Provost basic trainer for the RAF. The BAC 167 Strikemaster evolved from the Jet Provost as a light strike/close support aircraft, mostly for export.

The BAC 167 Strikemaster first flew on 26 October 1967 with a 3,360 pound thrust Viper, provision for 3,000 pounds of ordinance, and a pair of 7.62 mm machine guns. Capable of 472 mph at 20,000 feet, the Strikemaster was manufactured for eight air forces, including Saudi Arabia, Singapore, Oman, Kuwait, Kenya, New Zealand, Ecuador, and the Sudan.

It had ejection seats, the ability to operate from rough fields, and good armament for light strike operations. This made it an attractive alternative to more expensive jets. They remained in service until 2001, when the Sudan retired its Strikemasters.

Strikemasters found a ready market among warbird operators when International Air Parts of Sydney, Australia, bought surplus examples from Singapore and offered them for sale. The Strikemaster Mk. 81 in this 1994 Anoka County Airport photo is an excellent example. Delivered as G-AXEF in April 1969, it was sold to South Yemen as #503 and served until 1973. After rehab, it was resold to Singapore as #322 and served with No. 130 "Eagle" Squadron until retired in 1988 and sold to the Australian company.

Registered to Amjet in 1990 as N167SM, it was fully restored and won Grand Champion Warbird at the 1994 Sun'N Fun airshow and Reserve Grand Champion Warbird at Oshkosh, also in 1994. N167SM left Amjet in 1999 and flew with operators in Utah, California, Washington, and Delaware, before being lost on 26 February 2011 in a fatal crash into the Hudson River, near Kingston, New York.

This month's winner, Rolf Ringgold, remembered N167SM from the days when it flew from Anoka with Wally Fisk's Polar Aviation Museum. Dave Lundgren came close with his BAC 145 Jet Provost T.5 guess. The T.5 was the step just before the BAC 167 Strikemaster. All the best for Oshkosh. Thanks to all! Blue skies and tail winds.