Confessions Of An Airshow Announcer – The Missing Man 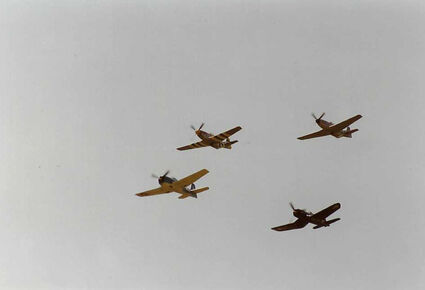 From a Planes of Fame – East show at Flying Cloud, a diamond flyby with two Mustangs, a Corsair, and a Hellcat, representing the Army Air Force and the Navy. The diamond is often flown ahead of the Missing Man to showcase the aircraft.

When he first said that to me over three decades ago, I didn't fully appreciate what he meant. Now, after announcing aviation events since 1991, I understand his message. Randy Sohn, and many others, all part of my aviation experience and life, have "Gone West."

It was Al Pike at Planes of Fame-East, who first handed me a mic. As show boss, he planned and coordinated the flying. At each Memorial Day Weekend show at Flying Cloud, t...