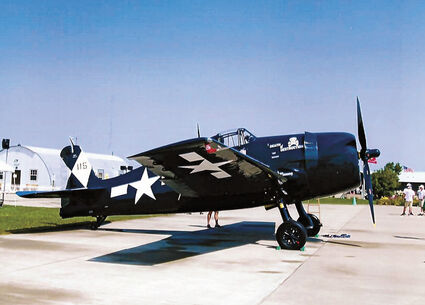 Early Sunday morning I negotiated my way around the southern part of the Twin Cities to avoid the orange barrels, cones, and hulking construction equipment. Traffic was light.

I crossed the river at Hudson and settled the Jetta into cruising mode for Mauston. From there, it was on to Ripon. The Wisconsin sky was noticeably bluer and the landscape greener. Smoke seemed absent.

After checking in at the old hotel in Ripon, I headed for Highway 44. Through the stoplight, heading northeast toward Picket, and I was going home. Year 36.

Much of what we do in life is based on ritual. For those of us who make the pilgrimage to Oshkosh, there are some constants. Indeed, things do change, but we hang on to our habits, our treasured memories, images, and time spent speaking aviation with like-minded people from around the world.

The seat was damp, as was the table top. The umbrella was still folded, occasionally dripping from the overnight rain. It was an old habit, an early morning ritual, a holdover from the late 1980's. It had been a trip to the Aces Café – now gone, for a freshly fried cake donut, a yellow carton of milk, and the welcome abuse ("You look like you don't need a donut, kiddo. How 'bout a diet?"), followed by, "Good morning, Oshkosh!" and honest to goodness yodeling by a short, chunky woman, who knew how to milk an audience for laughs. All in good fun, we'd take our turn in line for our wakeup call and, however unhealthy, the best donut in the lower 48, maybe the whole 50.

"Yodeling?" She pushed her glasses up and brushed a stray gray lock away from her nose. It wasn't the Aces Café, it was the A&W. "D'you mean that awful early morning, cowboy recording?"

Times change, but not necessarily our habits. It's morning, it's Oshkosh, and we old timers are fiercely holding onto our pasts, to our memories of sunny early mornings with the growl of a T-6 taking off, the Ford Trimotor snarling upward with a load of eager passengers, some wide-eyed kids, some wide-eyed adults. Yes, things change, but, still, it's home. It's Oshkosh.

I had a good week, even the rain couldn't dampen that. Well, it did get things and me a bit wet, but being back was enough. Over and over, it was, "It's good to be back!" Some things were forced to change. More distancing. Large crowded events had been canceled. Hand sanitizer bottles were strategically placed. In theory, fewer chances of being run over by service vehicles and single pilot golf carts. In theory.

I talked with a fire bomber outfit (who'd bought Minnesota's old Canadair CL-215s for conversion to turboprops), a crop duster pilot who explained to me the use of "Smokers" in aerial application operations, and a young lady from the Milwaukee office of the National Weather Service about the drought and dangerous smoke from wildfires that covered much of Minnesota. Later, I joined a well-attended seminar on hand propping outside of the Red Barn.

Tuesday morning I dodged rain to head across the creek to check out the Vintage airplanes, but got stranded under the awning of IAC building to put on an AOPA rain poncho. I wasn't alone. An Iowa flying farmer and I compared radar images on our cell phones. After talking drought, I hiked toward the Red Barn. I got no farther for a good two hours. Still, it was a very productive two hours.

Geoff, a transplanted New Zealander, now from southern California, and I chatted, accompanied by a concerto of rain on the roof, about the extraordinary climate of aircraft restoration and replica work that comes from his former home. We agreed Classic Wings magazine, published in New Zealand, ranks as one of the greatest periodicals covering Vintage and Warbird news. Geoff's query about why the Midwest was laid out in a north/south, east/west grid, generated a discussion about flying section lines. We were joined by a bald Ohio surveyor who reminded us about the Northwest Ordinance and George Washington.

"We still use the section lines in the sales of farm land and most county roads follow them," he said. "So do old flyers," I added.

It was a great week for new Vintage and Warbird restorations. A highly polished classic Ryan SCW-145 with "Firestone" prominently painted on its fuselage was tied down south of the creek.

I finally got some photos of it after the sun grudgingly came out. After I got back to Princeton, I looked it up in Ev Cassagneres' The New Ryan (Historic Aviation, 1995). Bennie Howard's masterpiece, the DGA (Damn Good Airplane) series was in full force. Travel Airs were big time winners, as were Stinsons.

In Warbird Alley, my fixation with British fighters was satisfied by the Canadian-built Hurricane XII from the Dakota Territory Museum. A C-53 (DC-3), once with Chennault's Civil Air Transport, took pride of place on the grass and in the Mustang parking lot, there were three new P-51D's I'd not photographed before. This brought my total to 180 Mustangs. A real beauty in RCAF City of Hamilton Squadron colors was my favorite. Indeed, there was something for everyone.

The week quickly wound down, punctuated by new arrivals and visits to the display buildings. The early week rain had caused some mud, disruption in the camp grounds, and delayed opening some of the vendors. A buddy of mine from Planes of Fame days was camping. Not only did his tent fill with water, but it collapsed. He described his battle with the rain-soaked tent as like fighting an octopus. Since I've never fought an octopus, I simply did like my students used to advise, "Just nod and smile, Mr. L. Nod and smile." Little did I realize, more was to come.

No lights. What the...? No night light, no numbers on the microwave, no streetlights outside the window. I found my ancient Timex and pressed the stem. It lit up. 0200. My flashlight was in my briefcase. After retrieving it, I groped my way to the bathroom. It was raining hard and brief flashes of lightning outlined the houses across the street. Unable to go back to sleep without the drone of the air conditioner, I got up.

It was a gray, damp dawn. The power was still out. I stepped across the concrete barrier and tap danced around the lake in the center of the hotel parking lot. Traffic was courteously taking turns at the dead stop light. The city had hastily installed temporary stop signs. Not a light was to be seen. I stashed my backpack and small cooler on the Jetta's back seat and headed for the airport.

The storm had battered Ripon, my Oshkosh home away from home for over 30 years, with high winds that had broken large trees, stripped others of leaves and branches, knocked over decorative fences and signs, ripped shingles off roofs, and, as I found out after I got to the airport, led authorities to request residents stay indoors due to downed power lines. 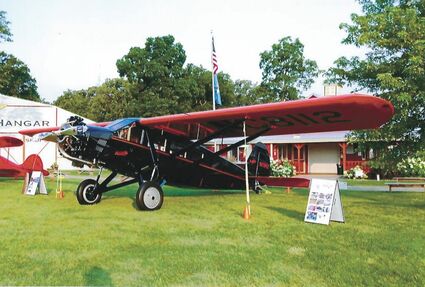 Totally gorgeous! This is the Vintage Grand Champion, a 1929 Travel Air 6000, NC8112, of the Mid America Flight Museum of Mount Pleasant, Texas. Parked in front of the Red Barn, it drew everyone's attention.

Thursday was my last day at the field. Grassy areas were soggy, many planes, especially campers, had left ahead of the storm, and tie downs had proved their worth. One Sorrell Hiperbipe had been covered in bubble wrap to protect it. A Mustang had received the same treatment. When I got back to Ripon late in the afternoon, power was still out on the northeast side of town. Clean-up, which had started over night, was progressing to the burping drone of chainsaws. The hotel power was back on, but had been out for over 10 hours. The manager was getting a damage report from an assessor and shaking her head. A tree was down on the house next door to the hotel. Somehow, I had slept through the worst of it!

Still, it had been an amazing week. Record crowds and a record number of airplanes. People were genuinely happy to be back. Yes, I walked more than ever, but also talked to more people. We shared a bench or picnic table or a porch and talked. We all spoke the same language. We spoke aviation. And we were at Oshkosh. Home again.