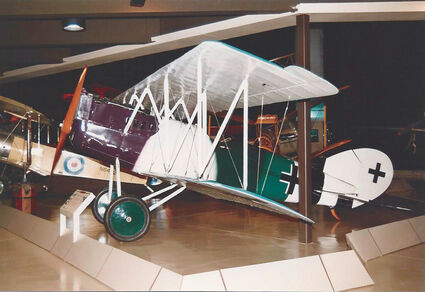 Pfalz Flugzeug-Werke was established in October 1913 to license build Morane-Saulnier monoplanes. From these,

it evolved its own series of Eindeckers fitted with synchronized machine guns. Further license work followed with L.F.G. Roland D. II biplane fighters. In May 1917, Pfalz produced its own fighter design, the 160 hp Mercedes powered D. III. In the spring of 1918, it built its best fighter, the D. XII, which competed with the Fokker D. VII in the June 1918 Aldershof fighter competition.

Although the 180 hp Mercedes powered D. XII had good qualities, it didn't get the publicity of the Fokker fighter. Jasta pilots who were expecting to be equipped with the Fokker D. VII were disappointed with the Pfalz's rate of climb and mechanics found the Pfalz's more complicated rigging system harder to maintain. Joachim von Hippel of Jasta 71 described the D. XII in this way, "These aircraft are extremely difficult to fly and the undercarriage usually breaks on landing...my flight has absolutely no use for these crates..." Still, the D. XII served with 10 front-line Jastas and some home defense squadrons. It proved strong in dives, carried two Spandau machine guns, and topped out at 106 mph at 9800 feet. When flown properly, they did well against the Camel and S.E. 5a.

At the Armistice, around 175 Pfalz D. XII fighters survived, some being shipped to the United States and Canada for testing. The U. S. examples were evaluated at McCook Field. Two of these were later used in The Dawn Patrol. Today, only four D. XIIs remain, one in Australia, one in France, and two in the United States. One is displayed in the Museum of Flight in Seattle and the other is the property of the National Air and Space Museum.

I photographed this Pfalz D. XII when it was on loan to the EAA. It was displayed at Hales Corners and later at Oshkosh. Before WWII, it had been owned by Howard Hughes and later by Buck Kennel, a property man with Paramount Studios. Kennel donated it to the Smithsonian in 1951. After restoration and display by EAA, it was returned to the NASM, who restored it again and painted it as it appeared in 1938 for "The Dawn Patrol."

This month's winner is Rich Klepperich of Webster, Minnesota. Congratulations to Roger Gomoll, who in December 2020, was awarded the FAA's Master Pilot Certificate for 50 years of safe flying via a Zoom conference. A great achievement! Blue skies to all.