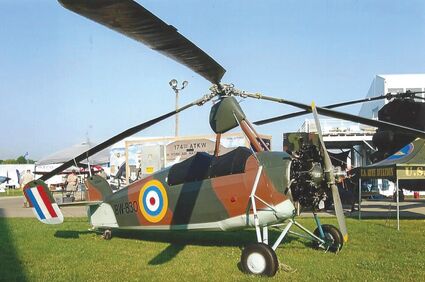 The Pitcairn PA-39 in this Oshkosh photo, RAF serial number BW830, later registered N3908, survived World War II and by 1971 was registered to Gerald Bruener of Orinca, California. Stephan Pitcairn acquired it and donated it to the EAA Museum.

Military interest in the autogiro centered on their use for surveillance and liaison. Only the Japanese succeeded in putting autogiros into service, and these, the Kayaba Ka-1, were for anti-submarine work from the escort carrier Akitsu Maru over the Tsugara and Korean channels.

The Kayaba carried a pair of 132 pound depth charges. The U.S. Army tested the Kellett YG-1B for artillery spotting in the mid-1930s, but found light planes would serve better. The British Avro Rota, a license Cierva C-30A, was tested with Army Cooperation Schools pre-war, but was changed to radar calibration dutie...