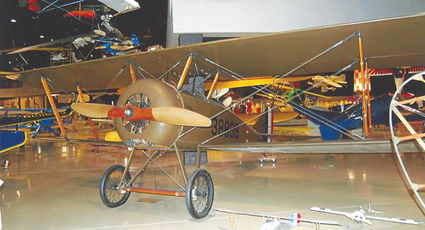 The Thomas-Morse Aircraft Corporation of Ithaca, NY, built a series of single-seat advanced fighter trainers for the Signal Corps/Air Service beginning in 1917. The S-4B, with the unreliable 100 hp Gnome rotary, appeared in October 1917. Other than being a bit tail heavy, the Tommy had good flying characteristics. With production of the S-4C, power changed to the 80 hp Le Rhone. The Le Rhone was built under license by Union Switch and Signal Company of Swissvale, Pennsylvania. Capable of being armed with a .30 caliber Marlin machine gun or a gun camera, the Le Rhone version topped out at 95...