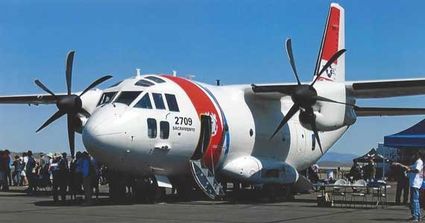 The C-27J is based on the Fiat G. 222 that first flew on 18 July 1970, and was delivered to Argentina, Italy, Libya, Nigeria, and Thailand. This Lockheed Martin/Alenia development with uprated engines, avionics, and other systems from the C-130J, took to the air on 25 September 1999. Technically called the Lockheed Martin Alenia Tactical Transport Systems, or LMATTS, initial orders were for Italy and Greece. Further aircraft were delivered to Australia, Bulgaria, Mexico, Romania, and the United States.

United States' operation of the C-27J began in September 2008 with the Air National Guard in Maryland, Mississippi, and Ohio. These aircraft were removed from service in 2013 for budget reasons and sent to Davis-Monthan for storage. From this pool, seven aircraft have been overhauled for operations with the United States Special Operations Command and fourteen for the United States Coast Guard.

The HC-27J in this Reno 2019 photo was delivered to the Air Force as 09-27018 and assigned between 2011 and 2013 to the 135th Airlift Squadron, 135th Airlift Group, Maryland Air National Guard at Warfield ANG Base. Sent to Davis-Monthan, Arizona, for storage in October 2013, it was refurbished and delivered as #2709 for the Coast Guard, one of six Spartans assigned to Sacramento. Along with the CASA HC-144A Ocean Sentry, the USCG HC-27J's main missions are drug interdiction, disaster response, and search and rescue.

Four readers correctly identified the Alenia HC-27J, with Gary Kuhn getting this month's honors. Other old reliables were Dave Lundgren, Ed Wells, and Graydon Carlson, who like me missed going to Oshkosh. Thanks to all who support the Minnesota Flyer. Blue skies and fair winds.