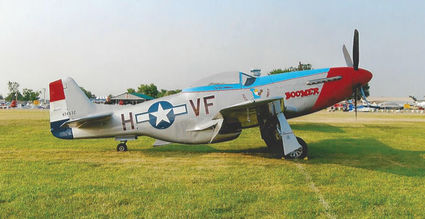 Toby McPherson's P-51D "Boomer" (N551TM). Just like WWII, it three pointed onto the grass at Battle Lake. Shades of Normandy.

I like to walk the field ahead of time. Early morning is best – time to drink in the atmosphere and savor, however briefly, the newly mown grass, listen to the birds that swoop low over the runway and get my old Rockports damp with dew.

Snuggled next to Battle Lake, just outside the town of 875 or so, about 20 miles east of Fergus Falls, is the only grass field I've called airshows at in three decades of announcing. A bit under 2800 feet by 200 feet with hangars and a corn field on one side and a bike path, pine trees and the lake on the other, the neatly mowed turf slopes gently upward to the northeast. A slightly faded orange windsock whispers quietly in the early morning breeze.

In 2013, I was asked up to announce the memorial fly-in. Since then, it's become my favorite venue. Grass field, great community participation and genuine rural welcome. The year 2019, was the 13th annual tribute to Gerry Beck who died in a Mustang crash at Oshkosh in 2007. I was there. I witnessed it.

The drive up I-94 was uneventful, especially for a Labor Day weekend. No rain, very little construction and the anticipation of great weather, good for fly-in traffic. Take the ramp off 94 toward Ashby and follow Minnesota 78 to the four way stop with Minnesota 210 outside the city. It's a resort town, with seasonal residences along the lake and tourist businesses along the hill that gives a scenic view. I follow the road to the Battle Lake Inn and Suites, known for its comfort, cleanliness and signs reminding visitors: "Do not Clean Fish in the Hotel Rooms."

Cars and aircraft arrive early Saturday morning. Brad and Jane Deckert's TBM Avenger sits, wings folded, in the golden morning light. Pat Kostelecky arrives with a carload of food for the luncheon. Cheerful volunteers climb out of pickups to begin the prep for the day.

The announcer's "stand" is a low flatbed trailer normally used by a lawn service. Chucks of sod are imbedded in its mesh surface. Brad moved it with his yellow aircraft tug to a position where I'll have a better view. After it was leveled, John and I wrestled unsuccessfully with the ramp. Frustrated, John grabbed a hammer from the hangar where we draw power for the sound system and whacked at the curved pins until they finally consented to work. John's girlfriend will bring her son's sound system at 0900. We'll have to figure out where the tangle of cables go without his help, as he's at North Dakota State University.

Trash and recycling cans out, pop-up picnic tables in place, long church tables with teetering gray folding chairs in the shade of the hangar that holds an old Cherokee, then, in drives the caramel corn truck with its red and white striped pop-up tent. Their stand is very popular.

More cars turn into the airport's gravel road, curving off the two worn tracks, down a small bumpy hill, through the cut weeds, and without need for direction, neatly line up with the small red ribboned wooden stakes. The Battle Lake Volunteer Fire Department's largest rig grumbles in and parks near the two gray porta-potties by the entrance. Children, immediately drawn to the fire truck and its shiny chrome, climb aboard. In the shade of a white tent, volunteers sell raffle tickets for the generously donated prizes to support the Community Fund.

There's no tower, only the 122.9 CTAF. Greg Benson runs the ramp, grass taxi and parking areas, with locals marshalling the visiting aircraft to spots in front of the hangars for warbirds, classics, ultralights and helicopters, while the old-fashioned general aviation birds pass through the gap between the hangars to the west and tie down.

Brad cranks the TBM, unfolds the wings, and with a growl from the R-2600, sends grass clippings flying. The Avenger crawls up the slope to launch on runway 24. Vehicles continue to arrive – pickups, SUVs, more supply drop offs for lunch, Pat directing traffic and another vender, this time with sunflower seeds, wheels in. On the grass runway, the power comes up, and the Avenger deftly lifts its skirts and heads into the early morning low sun. The TBM makes the first official flight of what will be an amazing day of flying.

Cars at first park in the mown lot, then along both sides of the entrance road, finally, those spots exhausted, on both sides of the county road. Bicyclers, joggers and strollers meander along the paved path on the far side of the field.

The old record for aircraft was 62. From the south end to the cornfield, west behind the hangars to another cornfield, and along the grass taxiway, they keep arriving. Garden variety straight-back, straight-tail 172s, some in need of paint and four-seat Cherokees with wheel spats. Five sleek, fast Mooneys, a covey of STOL Super Cubs and Huskies with fat tires and numerous homebuilts, including the popular Van's RV series. Parked and tied down, they sit with their engines ticking down and cooling.

The beauty of Battle Lake is the variety of vintage and classic machines that call in 10 or 12 miles out, make a downwind over the edge of the lake, swing in for landing on the forgiving grass, maybe with a skip and a hop, then settle down comfortably and proudly taxi to the display area.

Cindy, Gerry's widow is gracious, joining me at the mic, moving from group to group greeting people by name, exuding charm. Daughter Whitney becomes Vanna White for the raffle drawing, deftly pulling tickets from the barrel and helping me decipher the hand written names on the stubs.

At one point, with things calmed down, I eat my sandwich, answer a question about gallons per hour for the TBM and survey the grassy ramp near the stand. A Mustang, three Texans, the TBM, two classic Beech Staggerwings, a brown and gold Fairchild F.24W, the Warner radial model, six Boeing-Stearmans, three with 450 hp Pratts, one a former Red Baron Pizza ship, a Beaver amphibian, a rare Bellanca Cruisemaster, the "Cardboard Constellation," and three of its grandchildren, the Bellanca Viking, T-craft, Luscombes and Beck's blue RV-4 come home for the day. From Flying Cloud, John Sinclair flew the F4U-4 Corsair Beck restored, staging out of Fergus Falls.

Formation flights by the Mustang and the two Texans, the Avenger and the Corsair saluting the Navy, a pair of Stearmans with smoke systems. And it's all ad lib.

Departing aircraft hold it down over the grass as they leave, smoke if they got it, a cheery wing waggle, sometimes a low pass in review and a curving right turn past the spectator area to head home. The pilot who flew the farthest was from Missouri, a gentleman with a Cessna 182, who was invited by relatives, and as he told me, thought "What the hell, why not? The weather's great" and came for the weekend. The aircraft count for the day was an amazing 81. A new record. 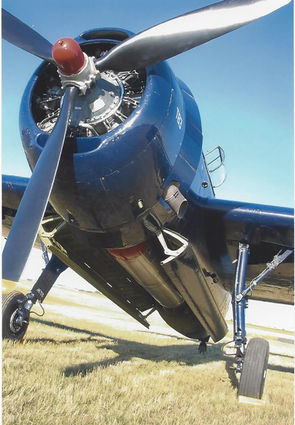 There's nothing like this event. Battle Lake is a retreat to simpler times. For a day, it's back to aviation's grass roots. Corn fields and pine trees. Wing waggles and mown grass blowing in the propwash. A Saturday small town outing shared with visiting pilots and planes. Low passes with smoke. Lawn chairs in front of the hangars. Vintage, classic, warbird, GA birds, some flying in from farm strips, all dropping in on the grass at Battle Lake, back to the days of the Barnstormers.

And when the last cars and planes are gone, the cars just a wisp of dust and the airplanes just an echo, our visitors, guests, neighbors, friends safely headed home and the toys put away, I walk out to the edge of the runway and stand quietly. I can still smell the freshly cut grass.