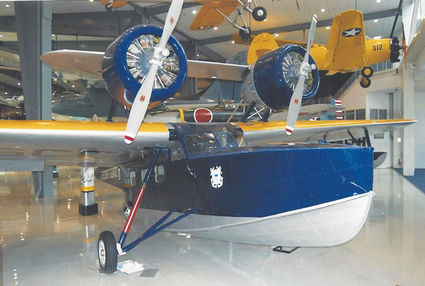 The Douglas Dolphin evolved from the Sinbad flying boat of July 1930. Looking like the 1929 Saunders-Roe Cutty Sark, the Sinbad was powered by a pair of 300 hp Wright J-5 Whirlwind radials. It carried two pilots and up to eight passengers. First flown in July 1930 from Santa Monica Bay, the Sinbad was sold to the Coast Guard and served until November 1939.

The amphibious Dolphin, designed for military and civilian use, was based on the Sinbad. Between 1931 and 1934, 58 Dolphins were constructed for the Army, the Navy, the Coast Guard, and civilian use. Power plants varied from the Wright R-975, to the P&W R-985, to the P&W R-1340. The Army Air Corps used them as transports, calling them C-21, C-26, and OA-4. Navy and Coast Guard models were classified in the RD category, as utility amphibians. One RD-2 was configured for President Franklin Roosevelt, although its not clear if FDR ever flew on it. A small number continued in service for air-sea rescue into the early days of WWII.

Civilian examples served with Pan American, Williams-Catalina Airlines, Standard Oil, and the Australian Petroleum Company. Executive models were delivered to such names as Wrigley, Vanderbilt, and Boeing. Yes, William Boeing. The aircraft in this April 2010 photo, is not a military aircraft, but William Boeing's personal Model 117, delivered as NC14205 in 1934 and christened Rover. Boeing used it for travel to Alaska, its primary pilot being Clayton Scott. Certified under Group 2 Approval #2-482 on 30 July 1934, and powered by a pair of 450 hp Wasp radials, Rover served Boeing until it was replaced in 1939, with another Douglas product, a tricycle gear, Cyclone powered DC-5, NC21701.

Boeing's Dolphin served with the CAA and Catalina Channel Air Service, before being acquired by Colgate Darden. Along the way it was registered NC26 and later N26K. It is now displayed in USCG colors at the National Museum of Naval Aviation in Pensacola.

This month's winner is Graydon Carlson, who years ago bought a set of plans for an RC model of the Dolphin. As always, thanks to everyone. Blue skies and fair winds.