Confessions of an Airshow Announcer-Merlin Magic 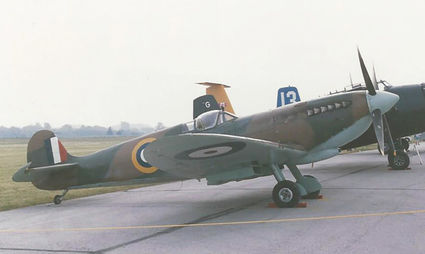 The Aero Shell Team snarled its way into the air. As usual, their formation was superb. Once the four Texans turned northeast, away from Runway 36, we resumed our conversation.

"You've announced for years. What was your favorite formation?"

I thought for a moment. Eight or nine people were gathered by the high wing Stinson trimotor's starboard Lycoming, some in the shade, others content to absorb the noon time sun.

"Well," I thought out loud. "I did announce the Trimotor Gathering here in 2005. That's seven years ago, but that really wasn't a formation. They flew in trail."

"I remember that," Mike nodded. Others smiled in agreement.

"As an announcer, the flight of the four Grumman Cats we did at Flying Cloud."

"All four piston cats. Lou Martin in the Wildcat; Blake Middleton in the Hellcat; Sam Korth in the Tigercat; and Randy Sohn in the G. 58B."

"Pond's Bearcat was actually one of two civilian models assembled from spares for Roger Wolfe Kahn, a Grumman executive and test pilot. No military equipment and much lighter than the Navy's fighter. It had been flown in shows by Bill Fornof."

"Never heard of that."

"There'd been an earlier, similar G. 58A, built up for Major Al Williams of Gulf Oil."

EAA's eternally busy Ford growled off with another load of passengers. Tail quickly up, rotate, and head toward the big lake.

"Part of what makes me remember that flight was that Randy flew the G. 58B wearing a coat and tie. He grabbed a set of David Clarks, climbed in, and flew spot on perfect formation."

I paused while a golf cart full of photographers cruised past.

"Still, I think my favorite formation was one I didn't call. I was there as a photographer. Hamilton, Ontario, the Canadian Warplane Heritage in June 1990. A celebration of the 50th Anniversary of the Battle of Britain."

"Okay, man, stop toying with us. What was the formation, all Spitfires?"

"No, all Merlin engines. Lancaster, Mosquito, Spitfire, and Hurricane. I only got to see it on Saturday, but what a sight. Eight Merlins in formation. The Song of the Merlin."

Parked near the Stinson was a gorgeous Lockheed L. 12A with Canadian registration. CF-LKD shone in the sun, its polished skin a tribute to the restorers' art. A salt and pepper haired gent from the Lockheed had joined the gaggle when I was asked about announcing formations. He remained behind when the others moved toward a freshly restored black and cream Howard DGA-15.

"I'd been going there since 1985 watching the progress of the Lancaster restoration. Each year a little more complete - more plexiglass, another turret, another engine mounted and plumbing installed, control surfaces recovered. Finally, in 1989, I got to see her fly."

He nodded, grinned hugely, then held out his hand. "Bob Hill," he introduced himself. "I was flying the Lancaster that day in 1990."

"I learned from Wing Commander Tony Banfield of the Battle of Britain Memorial Flight. In fact, I flew co-pilot to him on VR-A's maiden voyage in September 1988."

My black Sirocco was parked with its snout next to the snow fence. On Friday, I'd scoped out the arrivals with other photographers, walking the grass and the tarmac, staying clear of cruising aircraft tugs and belching emergency vehicles that darted about on pre-show missions readying the grounds for the weekend guests. I was able to get some decent frames of the Lanc, the Mossie, Spitfire, and Hurricane, along with the CWH B-25J, some yellow Harvards, and a pack of American registered Mustangs.

A pair of RAF Panavia Tornados, a GR. 1 from No. 29 Squadron and an F. Mk. 3 of No. 5 Squadron, both on NATO training duty at Goose Bay, were parked for easy access. No large crowds to contend with. The RCAF contingent included a Tracker, an Aurora, and a low-viz gray Hornet from No. 410 "Cougar" Squadron out of Cold Lake.

Today was it. The real thing. Show time. A good sky for aerobatic displays, NATO flybys, warbirds, and, since it was the 50th Anniversary of the Battle of Britain, what I'd been waiting for.

From early morning, to an hour before show time, Sue and I took in the exhibits, sampled the fish and chips, and with my trusty Minolta XG-7 mounting a 300 mm long lens, waited for the flying to begin. Using my ancient and battered 101 with a prime lens, we'd walked the flight line with hundreds of other enthusiasts and shot the static display. Yes, that was a Super DC-3, registered C-FALL with Air 500 markings. The Fairey Firefly was still a work in progress, as was the Bolly.

The finale of the show was a four aircraft formation saluting the RCAF and the Battle of Britain. All four ships were Merlin powered. As always, I checked my XG-7 over and cleaned the filter on the 300 mm. The 101 was stowed in my camera bag. We'd gotten a good spot on the flight line, not show center, but close.

A Spitfire IXe, flown by Howard Pardue, S-turned by, the first subject of hundreds of cameras. Next came the humpbacked Hurricane XII, a Canadian Car & Foundry version flown by Rick Franks, who I was to meet at Oshkosh in July. Like the Spit, the Hurricane S-turned side to side so Rick could see over the curved cowling that housed the Merlin. A real dream come true followed, Kermit Weeks in his Mosquito B. Mk. 35. I'd seen static Mossies at Dayton and Ottawa, but now I'd finally get to see one fly.

Finally, in all her majesty, VR-A, a Lancaster restored as a memorial to Andrew Mynarski, a Canadian who won a posthumous Victoria Cross for saving a fellow crew member's life on the night of 12 June 1944, in a Lancaster of No. 419 Moose Squadron. Bob Hill, a former RCAF fighter pilot and current Air Canada airliner captain was in the left seat. VR-A had been restored with Merlin engines rebuilt by John Sandberg's JRS Enterprises in Minnesota. Each bird launched individually and headed away from Mt. Hope to join up and pose for the photo ships before returning for the flybys. We waited...

"Cameras ready ladies and gentlemen! From your left, our salute to the 50th Anniversary of the Battle of Britain, our own Canadian Warplane Heritage Memorial Flight..."

For a moment, I just watched. Then reality and the photographer took over. "I may never get to see this again," I thought. I raised the XG-7 and panned with the formation. Four magnificent Merlin powered icons flew in formation. The field was silent except for what I've described for three decades of airshow announcing as The Song of the Merlin.

After the last flyby, came the voice of The Forces Sweetheart, Vera Lynn, in person, singing "We'll Meet Again," and then, "There'll be blue birds over, the white cliffs of Dover, tomorrow, just you wait and see..."

As the Merlins faded into the distance, Vera Lynn took us back to the summer of 1940, when RAF Fighter Command stood in the way of German invasion.

Bob and I exchanged cockpit visits. He marveled at the poor visibility out of the Stinson's windows and I was blown away by the leather, polished wood, and fine upholstery of the Lockheed L. 12A's executive interior. No wonder it was crowned the 2012 Vintage Grand Champion. 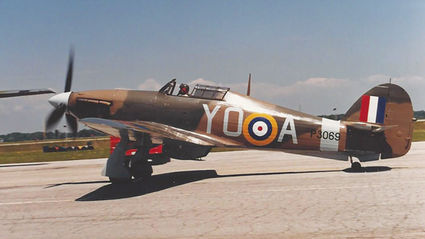 Rick Franks taxis out in the Hurricane XIIB, marked in the colors of No. 1 Squadron, RCAF.

And today, what of the participating aircraft from the 1990 Hamilton show? Lancaster FM213 still flies, one of only two in the world airworthy. Mosquito RS712 has been a non-flying resident at Oshkosh since the early 1990's. Spitfire MK297 and Hurricane RCAF 5377 were both lost in a tragic hangar fire in Hamilton on 15 February 1993.

Vera Lynn, "The Forces Sweetheart," was awarded an OBE, Order of the British Empire, in 1969 and became Dame Vera Lynn in 1975. In 2009, she recorded what was for that year, the top selling album in England. Now in 2020 at 102, her glorious voice, like the glorious voice of the Merlin, pays tribute to those of the who built, maintained, and flew the icons of the sky – the Lancaster, Mosquito, Hurricane, and Spitfire.

Long may they sing.