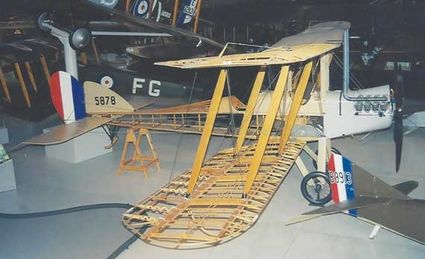 Fokker Fodder. Manfred von Richthofen shot down 19 B.E. 2 biplanes and his brother Lothar six. Werner Voss claimed 11. Too slow, poorly armed, and too stable for aerobatics, the Royal Aircraft Factory B.E. 2 appeared in 1912 and served until the Armistice on 11 November 1918. Over 3500 were built, serving on the Western Front, in the Aegean, Africa, Australia, India, Palestine, and Macedonia. On 13 August 1914, it became the first RFC aircraft to land in France.

Designed with inherent stability for safety, the B.E. 2 proved excellent for recon. Since little else was available, it flew bomber, recon, trainer, and night fighter missions. When the Fokker Eindecker appeared in 1915 with its synchronized machine guns, the B.E. 2 series' deficiencies became evident. It could not out climb, out run, out maneuver, or out gun its opponents. Its moment of glory came against Zeppelin night raiders, when, assigned to Home Defense units, with a .303 inch Lewis gun, Rankin darts, and Le Prieur rockets, the B.E. 2 claimed six airships.

Power for the B.E. 2c came from a 90 hp eight-cylinder RAF 1a Vee inline, which gave it a top speed of only 72 mph. Although it had a service ceiling of 10,000 feet, it took 20 minutes just to get to 6500 feet. Condemned to operations it was never designed for, the B.E. 2 suffered horrifying losses. The first RFC Victoria Cross, awarded posthumously, went to Lt. Rhodes-Moorehouse for his bombing attack on the Courtrai railroad station on 26 April 1915.

Wayne Muxlow of Minneapolis is this month's winner, correctly identifying this B.E. 2c as the one displayed in Ottawa. Blue skies and fair winds. Stay safe, stay well.