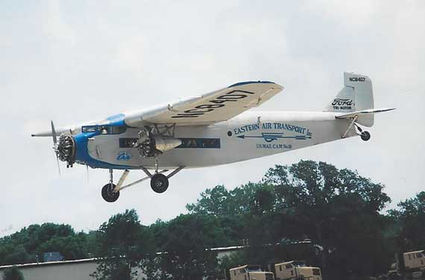 EAA's 1929 Ford 4AT-69 on approach to land on Runway 36 at Oshkosh. The Ford's corrugated skin earned it the name "The Tin Goose."

"Hey, aren't you the dude who announces up at Anoka?"

He wore three Canon cameras, all with long expensive telephoto lenses, a sleeveless T-shirt, baggy cargo shorts, and sandals. His nose and forehead were seriously sunburned, as were the backs of his calves.

"I have, yes," I replied and tried not to let the chocolate covered Dove ice cream bar drip on my shoes.

"I thought I recognized the beard," he nodded. "You announcing here?"

"Have you ever announced here?"

"Well, actually," as I took a mouthful of melting ice cream, "many years ago in Showcase."

"When was that?" he persisted.

It's true, I can claim three times upon the announcers' stand at Oshkosh. All three were tied to working with Greg Herrick's trimotors, two of those, 2003 and 2005, for the gathering of trimotors Greg and EAA's Cody Welch organized. Five aircraft in 2003 and eight in 2005.

Today we think of trimotors as quaint curiousities, antiques that were forced to give way to the Douglas DC-2 and DC-3.

Actually, trimotors were common as airliners, freighters, and bombers. Early engines, being what they were, made three engines seem safer. Lose one and you've still got two. Well, sort of ... one old trimotor pilot from the 1930's told me, lose one and the other two will get you to the crash safer.

The briefing room was hot and full. The windows were closed to keep out the noise and the air. Pilots, co-pilots, ground crew, owners, and a short bearded, bald guy, the designated trimotor announcer, sweated, made notes, and laughed. In 2003, as a promotion for the re-creation of the National Air Tour, five trimotors had been collected, three Fords, a Bushmaster, and a Stinson 6000B. I'd been elected to call the flight since three of the birds were Greg's and I knew Cody Welch of EAA and Bryan Godlove of Grand Canyon Airlines.

For Oshkosh 2005, those relics had been joined by the CAF's CASA 352, alias a Junkers Ju-52/3m, the only surviving Kreutzer Air Coach, and on an around-the-world flight, a Pratt & Whitney PT-6 powered remake of the wartime Dornier Do-24TT flying boat flown by Iren Dornier. An exciting line up.

Since formation flight was not an option, the flybys would be follow-the-leader, the aircraft in-trail. It was Friday. With any luck, today would be good. Thursday's flight had suffered a bit when NC1077 had to land early, and the Junkers got stuck in some mud.

Everyone was listening attentively to the briefer, when, "Whoa! That ain't good. There's an airplane upside down on the runway."

Naturally, we all looked. A small green single-engine high wing bird lay on its back, trying not to show its embarrassment. Pretty hard, though, when you're at show center. Line crew quickly assembled to tip it onto its wheels.

Briefing over, we filed down the outside staircase and trekked south towards the Vintage grass – all except the Do-24TT and Junkers crews, since they had parked on pavement.

Sue waited by the Stinson 6000B. I briefed her, grabbed a water bottle, and made ready to leave for the announcers' stand. The problem for the ground crews would be to clear away the spectators, who seemed to think underwing squatters' rights entitled them to shade. A few orange-vested Vintage line crew stood in a huddle gloomily surveying the prospect of uprooting the shade campers, their lawn chairs, blankets, umbrellas, camera bags, and a few not so legal coolers.

"When the engines start, they'll move," suggested a grizzled veteran in a straw hat.

I climbed the stairs, checked in with Wayne Flury, and waited. At the end of the scarred bench against the booth's wall Chuck Yeager sat in the shade. An EAA staffer with a fancy lanyard asked me to take a picture of him with the General. I agreed. "Take two," he said, and I framed the image in the viewfinder of his pocket Olympus 35 mm and pressed the shutter. Twice.

I watched the start up from the raised platform, listening as whistles and not so gentle verbal prodding herded the spectators away from the trimotors and the taxi strips. One by one, the Stinson, Bushmaster, and the two Fords, a 4AT and the larger 5AT, smoked to life, and with a blast of power against the rudders, trundled onto to the grass taxi strip and headed for the pavement. They had to stage 30 minutes before takeoff time. The EAA's 4AT, the Do-24TT, and the Ju-52/3m rolled in from the pavement and swung in line with the leaders. When 30 minutes was up, the sound guy, with his clipboard and head set, pointed me to a mic.

Each of the birds lumbered off with stately precision, following its leader, keeping a safe space to fly the three orbits down Runway 18, past the Oshkosh crowd while I filled in history and commentary about the crews and owners. When the three passes were complete, the old girls competently spread out and prepared for landing – an aerial conga line, to which some wag in the sound room had added some Scott Joplin ragtime.

"On behalf of the pilots, owners, and ground crews, we thank you for joining us in this historic gathering of vintage trimotors, saluting the Golden Age of Aviation. Please give our ground crews space so the trimotors can be safely parked. Remember, the best rule is to stay beyond the wing tips for safety and remain out of the prop arcs."

As each aircraft swung off the parallel taxi way and dipped down the berm into the grass, the Vintage marshallers tried valiantly to keep spectators from getting run over or chopped up by whirling propellers.

Kermit Weeks, who has three trimotors of his own (none on site this year), was standing next to me as I finished acknowledging the pilots, museums, and owners of the seven aircraft that had flown that day. The Kreutzer had been left tied down south of the creek, alas, without a pilot. 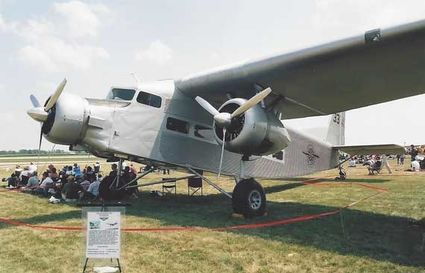 For some perverse reason, some airshow "fans" believed in first come first served and in the case of "shade rights," get there first, even with the airplanes in motion, not yet parked, shut down, and tied down. The Golden Wings' Stinson, Ford, and Bushmaster, followed by Grand Canyon's Ford, waddled from the ditch up toward the perimeter road. Pilot view over the noses – not good. Aircraft ground crew and Vintage plane handlers tried unsuccessfully to corral stragglers and keep them from being run over. The Junkers, Dornier, and EAA's 4AT, were, mercifully, not part of what looked like a rugby scrum.

I watched the commotion with trepidation. Larry, the EAA Showcase scheduler, shook his head in dismay and went inside. As each trimotor tried to turn into its assigned slot, nose facing north, the crowd raced for spots that were not yet secure – under the aircraft wings.

From behind me, a pleasant tenor voice began singing a tune I remembered from an old Glenn Miller LP. "Fools rush in where angels fear to tread..."