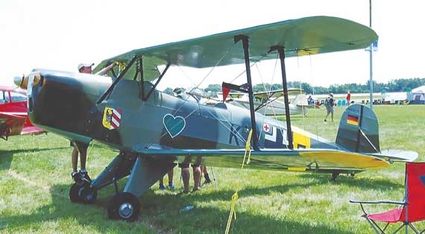 Carl Bucker, a World War I German naval aviator, founded Svenska Aero in 1921. He returned to Germany along with Swedish designer Anders Andersson in 1932. Established at Berlin-Johannisthal, Bucker produced a series of fine aerobatic and training aircraft, including the Jungmann, Jungmeister, and Bestmann, many of which served with the Luftwaffe and were manufactured under license in other countries.

The prototype Bu-131 was first flown on 27 April 1934 by Joachim von Koppen. Early models were delivered to the Deutscher Luftsportverband for civilian training. Luftwaffe deliveries of the Bu-131B with the more powerful 105 hp Hirth began in 1935, being assigned to primary training schools. Although replaced toward the end of the war with the monoplane, enclosed cockpit Bu-181 Bestmann, the Jungmann soldiered on, being assigned to night ground attack units on the Eastern Front. Wartime license production took place in Japan and Switzerland, post-war license manufacture took place in Switzerland, Czechoslovakia, and as with our subject aircraft, in Spain.

This month’s honors go to Doug James of Scottsdale, AZ, who noted it was a Spanish version switched to a Lycoming. The Jungmann is a highly valued aerobatic aircraft, said to have well balanced, responsive controls. In over 45 years of photographing aircraft, I’ve run across German, Spanish, Czech, and Swiss-built examples of this classic biplane. Blue skies and fair winds. Fly Safely