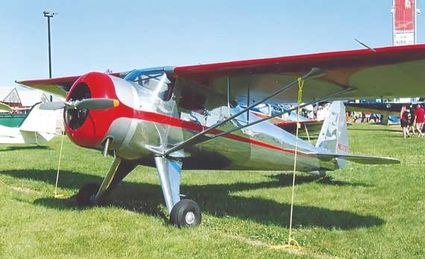 Donald Luscombe (1895-1965) served in France in WWI as an ambulance driver. It was in France that he took his first flight, in a Voisin pusher. After the Great War, he bought a Curtiss Jenny. His interest in developing enclosed cabin aircraft evolved from flying in the Jenny's exposed cockpit. The Monocoupe of 1927 came from his experiences. This was followed by the 145 hp Luscombe Phantom in 1933, the first all-metal light plane. Many readers will know or have flown the Luscombe 8 Silvaire and the larger Model 11 Sedan. Over 6000 Silvaires were manufactured after World War II.

The Luscombe 4, subject of this Oshkosh 2019 photo, also known as the Model 90, was designed to be a lower cost option to the more powerful Phantom. Powered by a 90 hp Warner Scarab Junior radial, the Model 4 was produced in small numbers to Approved Type Certificate #687 of 25 June 1938. With a wing span of 32 feet 1 inch and a length of 20 feet 11 inches, the Sprite had a loaded weight of 1725 pounds, including a useful load of 622 pounds. Top speed at sea level was a "spritely" 136 mph. Juptner, volume 7, notes that it sold at less than $4000 from the factory, including a metal prop. Only six aircraft were issued registrations by the Civil Aeronautics Authority.

When I first saw the Luscombe 4 shining in the sun across the road from the Red Barn, I wasn't sure what it was. On closer look, the Luscombe lines were clear. Owned by Ron Price of Sonoma, CA, its restoration was completed just before Oshkosh. Registered NC1337, the only surviving Model 4, it won the Bronze Age Runner-Up Award.

Seven readers knew the Model 4, plus a couple who thought it was the earlier, more powerful, Phantom. This month's honors go to Eric Olson, who commented, "I spent time with this aircraft at Blakesburg over the AAA Fly-in back in early September. Beautiful aircraft!" Indeed it is. Thanks to Eric and all the other faithful Flyer readers. Blue skies.