Confessions of an Airshow Announcer... 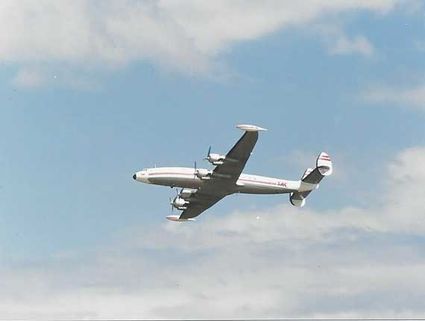 "Star of America" in flight. The triple tail was designed so it could fit into the hangars of its day. Tip tanks carry extra fuel. Graceful and fast, that was the Super Constellation.

Some aircraft look right in the air. Nothing compares to the graceful elliptical wing of R.J. Mitchell's classic Merlin engine Spitfire, Kelly Johnson's elegant Lockheed P-38 Lightning, or North American's purposeful and efficient P-51 Mustang. When it comes to airliners, the Lockheed Constellation and later Super Constellation are in a category all their own.

I announced the CAF Ghost Squadron shows at historic Hollman Field and Fleming Field from 1995 to 2002 during the days when the Minnesota Wing brought together some amazing ramps full of fabulous vintage and warbird aircraft.

I've always loved the Constellation. Few aircraft possess the beauty of the Connie in the air. Graceful curve to the fuselage. Triple tail. Tip tanks. Powerful Wright R-3350 eighteen-cylinder radial engines and P-38 like wing. It was another Kelly Johnson masterpiece, pushed along by Howard Hughes and Jack Frye who controlled TWA. The Constellation was the epitome of piston engine speed and elegance. Jack Frye and Howard Hughes set a transcontinental speed record of six hours and 58 minutes, or an average of 331 mph, from Burbank, CA, to Washington, D.C., on April 16, 1944. They used only 65% power most of the flight.

The July 1996 CAF show featured Save A Connie Inc., their Super G, and the even rarer Martin 404, "Skyliner Kansas City."

One of the things I've always liked to do as an airshow announcer is to arrange interviews with pilots, air crew, and special guests. On Friday, July 25th, called "arrival day" before the official start of the show, I went looking for the pilots of "Star of America." What is the famous Constellation like to fly? How is it a symbol of America's post WWII lead in airliners? I had a lot of questions and the best guests to answer those questions were the aircraft's crew.

"Listen," he said pointing to the Connie, "meet me under the aircraft in, say," he checked his watch, "half an hour and we'll arrange something."

I was cool with that.

N6937C had been delivered by Lockheed to Slick Airways in September 1959. It was built as an L. 1049H, a convertible cargo/passenger model. It served Slick Airways until 1966, when it went to Airlift International. For a time, in the early 1970s, it was used as a sprayer with fuselage tanks and wing mounted spray booms. Derelict after 1975, it had been acquired by Save A Connie in 1986 and restored to flying condition, then christened "Star of America." The white and red paint job was similar to TWA colors, minus the TWA titles.

"Ready?" Captain Clark met me by the air stairs. He pointed to the cabin door. "Climb up."

What was supposed to be - at least on my part - arranging interviews, turned into a ride in N6937C during the pre-show press flight. I belted in on the starboard side just behind the flight deck next to the Assistant Chief of Police for the City of St. Paul. Out the window just starting to turn over were the 3250 hp R-3350-93 Turbo Compound radials. Soon, "Star of America" was taxiing out to runway 14.

The takeoff roll and rapid acceleration were followed by the nose wheel up, then the aircraft mains up, and the hydraulic whine and "thunk" of the landing gear retracting into the wheel wells. Pilot Dick McMahn and co-pilot Chris Clark banked the big airliner east and we began a lazy circle of St. Paul with T-6 photo planes tagging along behind like so many ducklings. Although I'd had rides and logged left seat time in a B-17 named "Miss Angela," the old Fortress couldn't compare to the Connie for power. At one point during the flight, Randy Sohn, who could fly anything, walked back from the flight deck, looked at me, laughed, and said, "You again?"

N6937C at rest at Oshkosh. Note how high it sits off the pavement.

The ride was about an hour, circling over the state capitol, the Mississippi River, I-94, and a spider's web of railroad tracks near the Lafayette Bridge - an hour to make any piston engine airliner aficionado wish for more – an experience of a lifetime. After touch-down, rollout, taxi back, parking, and shut down, both pilots autographed a "Save A Connie" brochure for me and agreed to join me at the mic both Saturday and Sunday. It was an example of being at the right place at the right time. "Star of America" is truly the right name for Super Constellation N6937C.

Postscript: The C-69 Constellation, 43-10310, that Jack Frye and Howard Hughes used to set a transcontinental delivery record from Burbank to Washington, D.C., was also the aircraft that carried 73-year-old aviation pioneer Orville Wright on his last flight. On April 26, 1944, Orville - the surviving Wright brother - came to Wright Field in Dayton, Ohio, to be part of the press flight designed to celebrate the arrival at Wright Field of the Army's first C-69. He climbed aboard for the 50-minute flight and during the tour over Dayton, was ushered into the right seat and flew the Connie for a few minutes. He commented later that the C-69's wingspan was longer than his first flight in 1903.