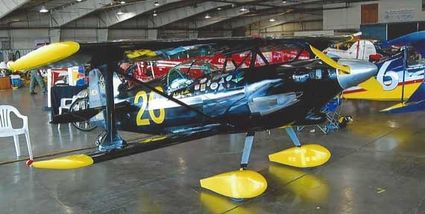 The original Mong Sport flew on May 1, 1953, the creation of Ralph Mong, Jr. Designed around a 65 hp Continental A65, it soon became a popular plans-built airplane, with a maximum speed of 115 mph and a stall of 50 mph. Light weight, at 970 pounds gross, including a 16-gallon fuel tank, its clean airframe appealed to the pilots when the biplane class was added at Reno in the mid-1960's, as the airframe proved adaptable to more powerful engines. In 1965 Bill Boland won the biplane class at 148 mph. Gradual modification of the Mong design led to speeds in the 250 mph range by 2006.

One of my favorite Reno moments is early morning, before the winds come up, shading my eyes from the sun, watching the snarling takeoffs by the racing biplanes. Make the picture black and white, and you can easily imagine scenes from 1930 Hollywood classics like Howard Hawks "Dawn Patrol" or Howard Hughes "Hell's Angels," the biplanes clawing for altitude, making a tight climbing left turn (it's always a left turn around the pylons), reaching for altitude.

This month's winner is Nancy Hanson of Elko New Market, who knew it was Andrew Buehler's "Mistress" that took third place in 2017. She must have been there! Michael Johnson and Zac Borncamp also nailed the Mong. Well done!

Thanks to the over 200 friends and guests who joined us at Golden Wings on November 24th for Chuck Cook's crash survival story. He provided an important lesson for all pilots about preparation, proper mindset, and not becoming complacent about what we do in the air.