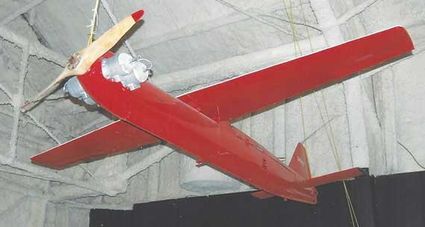 Actor Reginald Denny (1891-1967) flew with the Royal Flying Corps during World War I, first as a gunner on Bristol Fighters, later as a pilot. After the Great War he came to Hollywood to further his acting career appearing in over 200 silent films and "talkies." He also continued flying, becoming a member of the "13 Black Cats" stunt pilots which included Art Goebel.

Denny's interest in radio-controlled model planes led to the founding of a hobby shop and the Radioplane Company that produced radio-controlled target drones for the U. S. Army. By the end of WWII, they had produced over 9,400 OQ-3 drones. In 1948, founder Reginald Denny sold off his share of Radioplane. One of Radioplane's wartime employees, discovered by Army photographer David Conover in 1945, was a 19 year old Norma Jeane Dougherty, better known in later years as Marilyn Monroe.

Development of more sophisticated drones than the eight hp OQ-3 continued and in July 1945 the YOQ-19 debuted. As the OQ-19A, it was ordered into production in 1946. Capable of being launched from a catapult, a zero-length launcher with rocket assist, or air launched from a Douglas DB-26C drone director, over 73,000 of the OQ-19 series were produced into the 1980s. In 1952, Radioplane had been purchased by Northrop. Production and development of the OQ-19 continued under a variety of designations.

The OQ-19 in this September, 2012 photo was shot at the South Dakota Air and Space Museum, near Box Elder, South Dakota. Basic specifications for the OQ-19D model of 1950 include a 72 hp McCulloch O-100 engine, a maximum speed of 228 mph, a ceiling of 25,000 feet and an endurance of 90 minutes. If the drone survived, recovery was by parachute.

This month's honors go to Michael Johnson of Minneapolis. Joe Connell and Dave Lundgren also knew this pioneering target drone. Best wishes to all our Flyer readers. May the holidays be filled with blue skies and tail winds.