Not Our Year: A Desert Disappointment 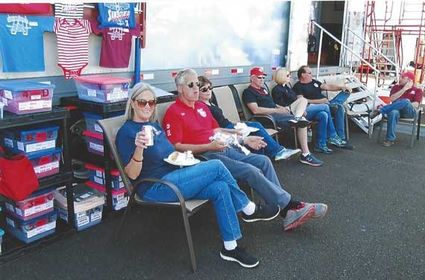 Sawbones has had a very successful Reno run without any major mechanical problems. Not this year. On a routine flight to burn off the 100LL so the tanks could be filled with racing fuel, the canopy departed the airframe. Commander Curt Brown, drawing on his 20 plus years of air racing experience and training as an Air Force test pilot, navigated the wounded Sea Fury back to the runway. Since Sawbones was forced to stand down for the week, the focus for the crew and my annual Flyer article had to change. Of course, not all the action is in the pits.

I get one morning, usually Friday, during race week to escape the pit, stretch my legs and surf the grounds for images that will become an article. In addition to my monthly Mystery Airplane column, I've written features about Oshkosh since 2002 and about Reno since 2011.

First, I head for a camouflaged C-47B named "Betsy's Biscuit Bomber" that's parked one aisle over. I'd not seen it since the 75th Anniversary display at Oshkosh in 2010. The DC-3 series is in my mind the most important aircraft in history. Tucked behind the Three, I spot an OV-10D Bronco in low-viz gray. Chuck Burin, my American Wings colleague at Anoka, flew them in Viet Nam. The CAF Hellcat is back, parked nearby. It's a powerful, purposeful beast, with the greatest kill ratio of all Navy fighters.

Photos of each taken, I merge into the river of people and head toward the pit gate, intent on spending time in the Heritage Display. Earlier in the week, I'd reconnected with Caroline Sheen the Photography and Art Editor of Air & Space Magazine. She encouraged me to go, knowing my long-standing association with vintage aircraft.

"Have you found the missing canopy parts?" a sunburned man holding a brat in his right hand asked.

"Yes," I assured him. "Eddie found the missing part last night near Pylon 2."

"Sadly, no. The canopy will have to be replaced."

"Ah! Sawbones is my favorite."

All over Stead Field and at the Peppermill Hotel racing fans expressed concern, asked about repairs and urged us to return in 2020. We have fans all over the world, in person and on-line.

I follow the crowd and pass a large statue of a horse wearing a "Cold Beer Here" blanket draped over its broad back. Not knowing much about horses, I guess it's a Clydesdale. Of course, it may be a Shetland pony.

Through the gate, into the vendor's avenue, the stores cluster against the back of the grandstand or huddle under a row of tents. I pass wooden model plane and snow cone stands, ignore the bizarre metal sculptures and skip the aircraft insurance tent. At one point, I was forced to dodge some school kids wearing red neckerchiefs and dance out of the way of a speeding golf cart. It's crowded here, even more so toward the control tower.

I'm looking for the Tsunami booth. Pictures I've seen show that John Bjornstad and company have made major progress on the fuselage and tail feathers. John spots me as I approach and we shake hands. I'm impressed by the work. Years ago, I helped drill out rivets so the tail section could be disassembled. John explains about the longerons as I snap a photo. It's cool, air racing history is being rebuilt. Next, I'm off to the Heritage Park.

I pass long lines of blue and pink biffies being besieged by school kids out on a field trip. Some wear school uniforms, others school colors – T-shirts, bandanas, caps, sometimes backpacks. I'm not sure if they understand all they see, but it's good to know someone is trying to engage them in aviation.

Since the sun has finally moved into a better position, I stop for a moment to photograph the control tower. Since he can't fly, Curt has assumed tower duties as an Unlimited Race observer.

Entry into the Heritage Park requires zig zagging around some metal barriers as well as avoiding some chattering school girls with noses buried in their cell phones. Almost immediately, I spot the beautiful Stinson SR-8B with the "Dept. of Commerce" markings I missed at Oshkosh. She's a beauty, with a Minnesota connection. Today I get a photo of it, although the practice of using large blue plastic barrels filled with water as tie downs makes getting a really clear shot of anything in the Heritage Park nearly impossible. The hulking dark blue Lockheed PV-2 Harpoon is back this year and there's a classic Grumman G.21A Goose I'd not seen before. The sun glints sharply off the highly polished aluminum of a classic Globe Swift, its Art Deco cowling and rakish tail making it look like it's doing 200 mph while parked.

"Hey, I heard you guys found that canopy rail."

"Eddie found it," I respond. "With luck Rick will be able to figure out what went wrong."

"I hope so," she smiled. "This should have been your year." 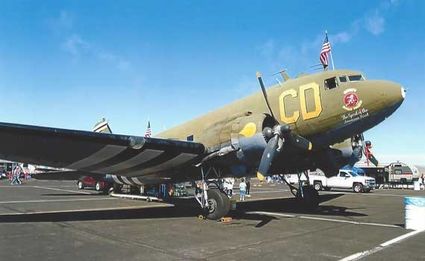 On my way back to the pit, I stop to talk to Mustang ace Bud Anderson. I sat in on this year's Warbird in Review session at Oshkosh that featured the 98 year old member of the 357th Fighter Group. In 1990 he autographed his book for me. Colonel Anderson is a true American aviation icon.

Back home in the pit, in the shade of the racing trailer's interior, I take a moment to scroll through the shots. They're a mixed bag of people, airplanes, displays and curiosities, what one might expect at the air races. The last frame is of a very large stuffed gorilla sitting in a white and red cowling holding a beer can. Why not? It's Reno. You can't always be serious.

NOTE: Check out sawbonesair.com for photos, videos, articles on air racing history, the Reno Chronicles, and a list of Sawbones' sponsors.