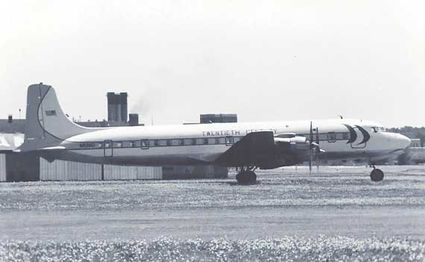 This photo of the DC-7B, registered N836D was taken at Holman field in 1976. It sat at STP for years, being moved only by tug only when the airport would flood in the spring.

It was a very wet Saturday morning and more heavy rain was forecast. It had been a year for it. Discover Aviation Days had been rained out and Red Wing's weather was less than polite. The motel window needed cleaning, the shower curtain had mold around its hem and the air conditioner rattled faintly. The restaurant across the half-filled motel parking lot was dark. Only some lightning and the melancholy rotating RST beacon visible in the east lit up the early morning.

I've been rained on as a photographer, as a pilot and as an airshow announcer.

Back in the mid-seventies, I stood in the door of a big hangar in Mankato vainly trying to photograph lightning that had shut down the Blue Angels.

I'd hidden under a Spitfire at Oshkosh in 1990, unsuccessfully attempting to stay out of the mud.

The CAF Ghost Squadron show at Holman Field in 1995 got cut short by strong winds and heavy rain. I'd killed the switches on the sound system, tied the tarp down and run first under a Martin 404, and finally into the classic 1930's St. Paul terminal. The rain was always indifferent. It didn't matter if I was working as a photographer or an announcer. It just left me wet.

I turned back into the dark motel room and clicked on the TV. The Weather Channel's six a.m. version of Vanna White with the isobars didn't offer much hope for the morning. It all depended on how fast the cold front moved.

A tall man with an umbrella and a Clark Gable moustache stood in the foyer looking sadly across the rain-soaked ramp. Another fellow in a yellow rain poncho stood outside under the awning smoking a Camel. No matter where you looked, you could see the gray rain. I paused at a display window and looked at a blue teddy bear wearing a Rochester Aviation shirt, then went in search of a weather computer to check the radar.

"Maybe," I muttered with a sigh.

"There's the edge of the rain," he pointed. "Maybe by ten o'clock."

Indeed, it did clear by ten and we began to unload the hangar. Big aircraft in the back, small to the front, made it reasonably easy. Some were tugged into place, some pushed and some were left in the hangar. Police tape around the propeller tips, doors open, "No Entry" signs in place. Promotional material in cardboard boxes and aircraft info signs placed and sandbagged against the teasing wind. Finally, lawn chairs idled in the shade of the large wings of the Stinson and Bushmaster trimotors.

"Can we get you to describe Greg's planes when you're not calling the flying?" Steve asked.

The announcers' stand was a low platform near the main display hangar. I was working with a local radio personality who handled the music and commercials. Behind us in the hangar were the fragile Wright Flyer replica, a couple of Golden Wings biplanes and some displays about Rochester's aviation history, including the wartime connection with the Mayo Clinic.

Concessions lined the orange snow fence and dark green biffies welcomed visitors near the main entrance. The display line was long and presented a varied portrait of aviation. A 737 cargo plane, home-builts, a Lake amphibian, a Czech-built MiG-21, a Grob glider and various light planes provided by the FBOs dared it to rain again.

"Don't say anything yet, but we're still working on the F-16 flyover," Steve whispered.

"Yup. We had a couple from Duluth make passes over Anoka one year."

I'd forgotten how nice southern Minnesota airshow crowds were. Back in the early 1990's" I'd called flying displays for Buzz Kaplan's "I can Fly" at Owatonna. People were polite, asked good questions and smokers were almost nonexistent. But, as always, wherever I've announced, there are some people who had long ago aviation connections.

"You don't know me, but I'm Bill Haas. I won your Mystery Airplane Contest in June. The de Havilland Comet?"

"I had my first airplane ride in the old "Tin Goose" back before the War. Almost made me deaf."

The afternoon was warm and I alternated announcing with talking to people who came to the Fairchild FC-2W2. The big wing made good shade. There was no shade on the announcer's stand.

"Greg just called." Craig was back from running errands. "You know that DC-7 at Holman?"

"Yeah. It's supposed to leave for someplace down south soon."

"It's leaving today. He's working on getting them to do a flyover on their way."

At times Steve broadcast music or control tower transmissions. Without a scheduled program, it was a relaxed gig.

"We're still working on the F-16 fly over," Steve informed me. "There's been some weather in the way.

"Big surprise after last night, but people are asking about it. They like jets."

"That's the problem with advertising something. We can't always be sure we can deliver."

"It's on the way." Craig stuffed the cell phone back into his pants pocket. "There'll be a Citation escorting him."

"When we hear them call the tower."

"Hey, Tom. The F-16 is inbound from Sioux Falls," Steve trotted up. Suddenly, things started to get busy. I keyed the mic.

"Ladies and gentlemen, we've been informed that the F-16 is on the way. We'll keep a listen to the control tower and let you know when he's near. Also, for those who remember the Golden Age of piston engined airliners, we have a special treat we're working on. If we can pull it off, we might get a fly by from one of the last operational Douglas DC-7s. This particular bird has been sitting at St. Paul's Holman Field for about 30 years and is being ferried south for a full rebuild."

Much in the air display business is improvised. As we say, when it happens, it's real. Sometimes, things happen at the same time.

"So is the Douglas."

"Ladies and gentlemen, get your cameras ready. The tower has received calls from both the F-16 and the DC-7. They're about ten minutes away."

"The tower's asked the DC-7 to circle," Steve added. "The military wants a clear area for the F-16 fly over."

The small gray arrow made a couple of passes, and much to the crowd's pleasure, disappeared with a roar straight up to 10,000 feet when it departed. Then what I'd been waiting for appeared. I noticed, too, that the crowd around the announcers' stand had grown.

"Eyes to the left, folks. Now here's a rare sight. It's a great privilege, and first for me as an airshow announcer, to welcome to Rochester, the Douglas DC-7!"

The weathered, but stately four-engined classic flew serenely over the field with a white Cessna Citation jet as close escort. I'd seen all the earlier Douglas piston transports fly, called some in shows and ridden in the DC-3, but this was the first time I'd seen a Seven in flight.

The crowd was silent, as in tribute to the old girl, and I savored the sound of the Wright R-3350 radials. Slowly, the ancient relic that had sat at Holman, only moved to avoid flood waters, faded in sound and sight to the southeast, its modern day jet escort obediently in trail.

"Pardon, me. Do you by chance know what airline that Douglas flew with?" 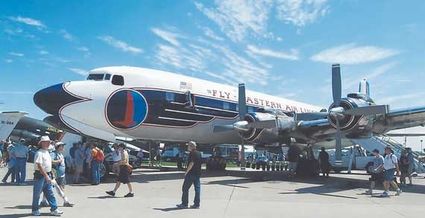 Finally, after years of sitting, the DC-7B was purchased and taken south for restoration. As you can see in this photo taken at Oshkosh in 2010, the old girl cleaned up real well!

She was well preserved, in her late sixties, with short gray hair and fine, alert brown eyes. She was rather overdressed for an airshow, but I gathered that she was used to being elegant.

She smiled, looked skyward where the big Douglas had been, as if still feeling its wake and hearing the deep drone of its engines.

"I flew on all the Douglas airliners." She gave a soft sigh. "I was a stewardess for Delta. I never thought I'd ever see a DC-7 in the air again. It was..." she looked down at her slender hands, "the most luxurious way to fly. We always felt so secure. I loved it."

She looked at her hands again, took a deep breath, then looked up and extended a still firm right hand toward me.

"Thank you," she whispered. "Thank you, so very much."

After she let go of my hand, she put both hands to her face and wiped away her tears.