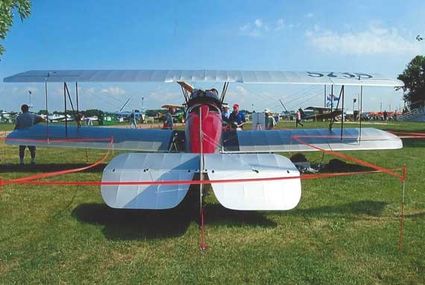 Formed in 1922 in Lincoln, Nebraska, by Ray Page, the Nebraska Aircraft Corporation became Lincoln-Page Aircraft in 1927. Lincoln began by rebuilding surplus Standard J-1 biplane trainers into a more useful and powerful model called the Lincoln Standard. Powered by a variety of engines, including the OX-5 and the 150 hp Hisso, these modifications were popular in the early 1920's.

The Lincoln-Page LP-3 was certified in March 1928 under Approved Type Certificate #28 with a 90 hp Curtiss OX-5. A three-seat open cockpit biplane of the traditional steel tube fuselage with fabric covering, wings of spruce spars and spruce and plywood ribs, also with fabric covering, designed with the help of Victor Roos, the LP-3 was in the same class as the Swallow, Alexander Eaglerock, and early Wacos.

NC5735, in our Oshkosh 2018 photo, was built in May 1928, but wrecked the following year with less than 100 TT. It was stored until 2013 when restoration began. After a 3500 hour restoration by Greg Heckman of Polo, Illinois, it flew again on May 31, 2018. It was tied down in front of the Vintage Red Barn last year and earned the Vintage Antique Grand Champion Award. It is said to be the only OX-5 powered LP-3 flying.