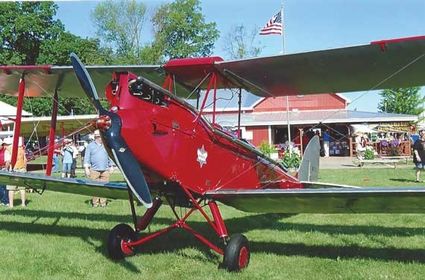 "Mud, mud, glorious mud – Nothing quite like it for cooling the blood..."

From "The Hippopotamus Song" by Michael Flanders and Donald Swan

More like curdling or boiling the blood. 2019 seemed a reprise of Sloshkosh and the Splash-In from earlier days. Due to heavy rains before the convention, parking autos, RVs, and airplanes proved a challenge and walk times to the gates for the notorious bag check seemed like infinity. In 35 years, I've never parked so far away. Packs of seagulls circled and cried out ominously while looking for handouts. Still, there was no shortage of fascinating aircraft, displays, and good friends to connect with and new acquaintances to meet.

I've been accused of favoring de Havilland aircraft in my Mystery Airplane column, something that is almost true (Douglas actually comes out ahead). In front of the Vintage Red Barn was a magnificent new restoration of a 1928 de Havilland DH-60G Gipsy Moth, NC432, ex-CF-AQF, that had once been owned by famous boat racer Gar Wood (1880-1971), who was the first boat racer to exceed 100 mph. In 1932, he drove Miss America at 124.86 mph. Powered by a 120 hp Gipsy II air-cooled inline, NC431, now owned by Michael Maniatis of Milton, NY, was awarded the Silver Age Runner-Up prize.

Remember the TV series Sky King? It ran for 72 episodes from 1951 to 1959 and still appears on cable reruns. I bet some of you remember Penny, Sky King's niece – some of you may even have had a crush on her. Actress Gloria Winters played Penny to pilot Kirby Grant's Sky King. Parked in the Vintage area (for sale!) was the 1960 Cessna 310D, N6817T, that was Songbird III, the last of Sky King's three aircraft, all based at the Flying Crown Ranch. The adventures of Sky King, the flying cowboy/detective, provided an introduction to aviation for many who later got the flying bug.

My photo of the giant Martin Mars at Lake Winnebago graced the September 2016 Flyer cover. The Seaplane Base, accessed by a $3.00 school bus ride, is not only great entertainment, but a good place to relax. Sue and I rode the tram to the South Forty, and there, changed to the bus. We wove through the trees, small farms, and hidden homes, to the lake shore.

A woodchip covered path led through the forest, amply decorated with tree stump flower pots, vines, and quiz signs testing the walker's knowledge of water flying. To check the answers, you had to go to the Wipaire building. I got most right, but seriously failed on "Which state has the most seaplane pilots?" Minnesota?

Alaska? It's got to be Alaska. No, it's Florida.

Free pontoon rides around the lagoon offer a closer look at the moored Cessnas, Pipers, Beavers, T-Craft, and Buccaneers. Our captain was John, who holds the license required by the Coast Guard for carrying passengers. He was assisted by Amanda, who hailed from Bemidji. Six riders to a pontoon was the limit, which permitted commentary and questions. It was a calm, cool, cloudy Friday, with lily pads decorating the lagoon. Valet boats puttered about the bay towing seaplanes to the docks for departures. A slower pace, shade, without announcements, it was an escape from the constant motion, noise, and crowds at Wittman Field.

Over a dozen Douglas DC-3s , some fresh from flying over Normandy and saluting the Berlin Airlift, came to Oshkosh. One, with a "mix and match" paint job, came from

Buffalo Airways, famous for the Ice Pilots TV series that airs on The Weather Channel. Saved from oblivion by Plane Savers, it had served as FZ668, a Dakota with the RCAF before having a long civilian career in Canada. Like the TV series, C-FDTD and Mikey were a big hit.

Our last day at EAA was Saturday. Another bus trip took us to the Museum and Pioneer Airport. I specifically wanted to see the Frank Borman exhibit. In 1993, when I was announcing for Planes of Fame-East, Borman was our special guest and flew the P-63A King Cobra. Fittingly, this Cobra had been assigned to NACA, the forerunner of NASA, during WWII. Borman, a longtime supporter of EAA and Warbird pilot, had chosen EAA for his memorabilia. Noted for the Apollo 8 mission that circled the Moon on Christmas Eve and sent back the first long range photos of the Earth, Frank Borman, Jim Lovell, and William Anders, were also the first to leave low Earth orbit, reach the Moon, orbit it, and return. They splashed down on 27 December 1968 and were recovered by the USS Yorktown. Over 1000 items illustrated Borman's career as a pilot and astronaut. 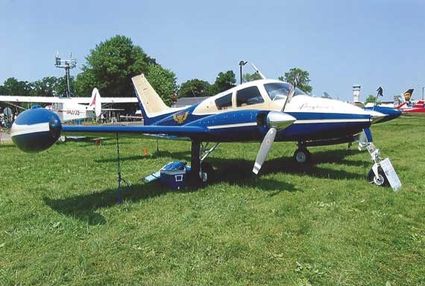 Song Bird III, a Cessna 310D, was the third of Kirby Grant's mounts in the Sky King TV series.

Many parts of Oshkosh are rooted in tradition. We stay at the old Welcome Inn in Ripon where Jacquey and Jolene know their EAA customers by name and exchange stories about what the year has been like. Each day we drive State 44 though little Picket, past the Cenex station and the cemetery, across the Oshkosh city limits to Wittman Field. Two, sometimes three times a convention, we stop for fresh donuts. I get mine with milk, while Sue gets coffee with hers, a tradition started over 30 years ago. Perhaps not very healthy, but a good way to start the morning.

"Do you yodel?" I asked. The poor girl behind the counter at the A & W looked at me with disbelief. "Back in the Eighties there was a lady at the Aces Café where we got fresh donuts. She'd sing out 'Good morning, Oshkosh!' and yodel." The young woman looked at me like I was crazy. From the back of the tent by the donut fryer, an older woman laughed. "You're not the first to ask that question this morning! Maybe we'll have to hire a yodeler for next year!"