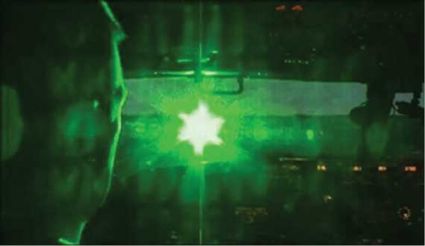 I hope you never get hit with a laser but it is a situation that should be discussed before you get surprised. Unfortunately, shining aircraft with lasers is an increasingly popular past time for people often uneducated in its potential danger. There are thousands of reports of this activity yearly, with the number of events occurring increasing each year.

Shining a laser on an aircraft is a federal offense that carries a large fine and jail time. In California a man was sentenced to two years in prison. The FBI offers $10,000 rewards for turning in offenders.

Being shined with a laser can result in temporary or permanent eye damage. If you get shined, try to make a quick note as to where it came from. Be as specific as possible so that you can provide authorities as much of a chance of finding the offender as possible. The next step is to take advantage of a safety asset at your disposal and report the incident to air traffic control (regardless if you were already talking to them or not). They will be able to broadcast to any other aircraft that may be affected, thus helping other pilots in the process.

ATC will ask you a few questions. They'll need to know who you are and where you are, especially if you weren't already talking to them and the reason you are calling is to report the laser event. Then let them know when it happened, 10 minutes ago or 2 minutes ago, etc. They will need to know the altitude you were at when the event occurred. Next is the most important information regarding the laser event. What color was the laser and from where did the laser come from? Remember, the more details you can pass on the more information the authorities have to locate the offender.

Often, there are several reported incidents in an area before the individual gets caught. Now you have some tools to help you alert others of potential danger and possibly resolve the situation. I hope you never have to use this knowledge!