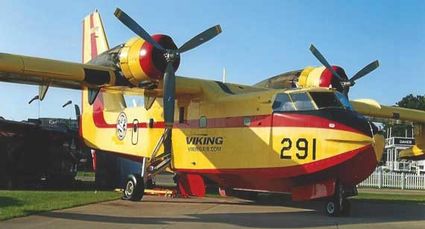 Established by the Canadian government in 1944 at Montreal to build a Merlin engined version of the DC-4/C-54, Canadair manufactured its own designs (Argus and Tutor) and license - built F-86 Sabres, Lockheed T-33s, Lockheed F-104s, and the Northrop F-5. In 1986, the company was sold to Bombardier.

Canadair's unique amphibious CL-215 fire bomber, powered by two 2100 hp Pratt & Whitney R-2800 radials, was first flown on 23 October 1967 by W. Longhurst and made its first water takeoff on 1 May 1968. Able to scoop 1440 gallons of water in 12 seconds, the CL-215 was designed to replace aging WW II air tankers. Capable of making over 100 air drops in a day's operation, the Scooper has found buyers in Canada, the United States (including Minnesota), France, Spain, Greece, Thailand, and Venezuela. Military operators have used the CL-215 for Search and Rescue, cargo and passenger ops, as well as firefighting.

C-GBPD, built in 1985, appeared at Oshkosh in 2018. Once with Buffalo Airways, Northwest Territories, it is now owned by Viking Air Ltd., with bases in Victoria, BC, and Calgary, Alberta.

Viking holds the type certificates for de Havilland of Canada and Canadair products and builds new Twin Otters. It plans to re-engine the piston CL-215 with turboprops, update all systems, and feels there is a good market for a dedicated amphibious air tanker.

Dick Harden of Richfield is this month’s winner. Gary Kuhn remembered the two CL-215s with the Minnesota DNR, tankers #223 and #226. I called #226 in an airshow at Anoka County Airport in May of 2001. Reno approaches, check out sawbonesair.com to follow Minnesota’s Unlimited Sea Fury go for the Gold in September.