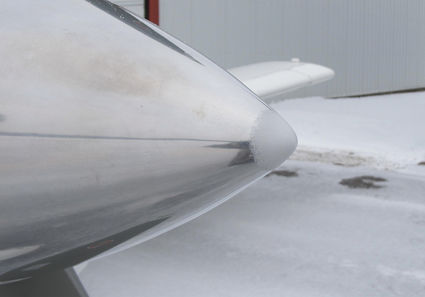 Frost building on the nose of a plane.

As we set our clocks back an hour each November, our thoughts shift toward coping with Old Man Winter's impending visit, and the best ways to cope without hibernating for five months. For those that choose to remain current and proficient, the following tips will help endure the season:

When planning your flight, be sure all elements are covered such as:

Weather - The night before the flight, obtain a standard weather briefing. Knowing what to expect in the form of frost or snow the night before your flight will help you determine if you need to be at the airport early to give yourself time for deicing the aircraft, or shoveling snow off the hangar apron. Attire - Dress warmly with appropriate attire such as hats, boots, gloves. Leaving coats loosely worn in flight is preferred over stuffing them in the baggage compartment, only to have them out of reach in the event of an off-airport landing. Dress as if you were going to walk a distance from a forced landing in a remote area.

Take time to do a thorough pre-flight inspection; especially if the aircraft is stored outside. During the walk-around, install/remove engine baffles as required. Ensure all ports on the airplane are open (static vents, pitot, oil breather, stall warning tab/port, fuel tank vents). If the ice has started to melt, make sure water has not migrated into the control surface hinges where it may refreeze and cause a problem later. When checking fuel sumps, be watchful for slushy water in the sampler. Inspect the wing and empennage surfaces for frost and snow. If you do not want to become a test pilot, it must be removed. Do not count on it blowing off during takeoff. Preheat your engine to save wear and tear during start up.

Position the main wheels on a dry surface to prevent lurching forward on engine start. Prime according to manufacturer's recommendation in the POH. Do not pump the throttle. An unexpected fire can result. If the engine is reluctant to start, keep starter cycles no longer than three 10 second cycles, with a five minute cool down period in between. Once started, keep engine RPMs above idle, to facilitate a quicker warm up.

Mag checks can be made when the engine doesn't exhibit stumbling or stalling when the throttle is advanced. When lined up for departure, smoothly advance the throttle to full power and enjoy the flight. When descending to the traffic pattern, refrain from bringing the throttle to idle to lose altitude. Gradual changes in power settings will help prevent shock cooling of the power-plant.