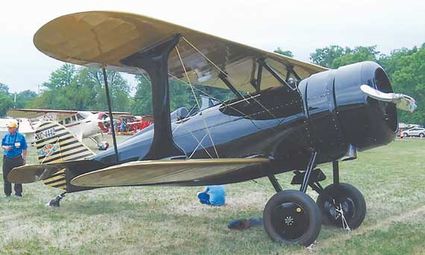 Associated with Wichita and Chicago, Laird was famed for his custom-built sport and racing aircraft. Known initially for the Swallow biplane (about 43 built between 1920 and 1923), in 1924 he began design and manufacture of a series of Laird Commercials that sold well to "sportsman" pilots even during the Depression.

NC4442, shown in this Oshkosh 2012 photo, was partially built and stored for 60 years. Completed by Dan Murray in Santa Paula, CA, it was rolled out in 1993. Powered by a 450 hp R-985, it cruises at 170 mph and burns 20 gallons per hour. It won the Antique Reserve Grand Champion award at EAA in 2012. The last few years, still registered NC4442, it has appeared at air displays in France and Great Britain.

Lots of correct answers on this one, with Chris Price of Shullsburg, Wisconsin, winning this month. Graydon Carlson, wrote that his set of Juptner has gotten a lot of use. So has mine! Blue skies and tail winds. Fly safely.