The Winds of Reno

Historian Tom Lymburn, long time crew member of the Sawbones race team, shares his account of the annual trip to Nevada to pit flying machine against flying machine in the great race in the desert. 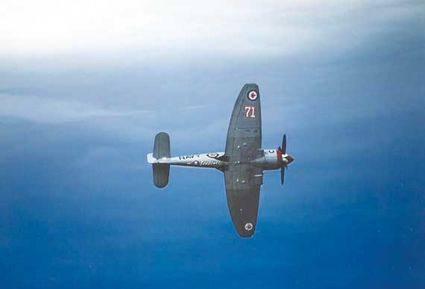 The 1949 Hawker Sea Fury N71GB, "Sawbones" at full clip against a threatening Nevada sky earlier in the week. The course was very turbulent at times. The aircraft, owned by Dr. Robin Crandall, Piloted by Curt Brown finished third in the Reno Air Races at 401.721, after qualifying at 413.511.

The dusty black Nissan rests by the "4C" pillar. I ditch the empty water bottles and other trash in a nearby can and settle in for the drive to Stead.

We're staying at the Peppermill, a nice hotel and casino where inside it's never day or night. It clanks, whistles, clinks, shouts, and buzzes without pause, the search for the elusive jackpot an addictive lure. To me, it's a place to eat, sleep, and write.

I'm not used to a pushbutton start or an automatic transmission. Old guy that I am, all my cars have been manual transmissions. Swing past the yellow cones, down the steep ramp, check the mirrors, right onto Virginia Street, left onto Moana, under the bridge, and with the morning commuters, speed up the ramp onto I-395.

Stead is a good 600 feet higher than Reno-Tahoe International. We climb. Signal over into the far left lane to avoid the merging traffic from I-80, cross over McCarran, and climb through dead brown hills punctuated by billboards and a scattering of campaign signs. Cracker box houses ring some hills, others are scrub. Past Lemmon Drive the road narrows from three to two lanes, past the pull off for attaching snow chains, and there's the green sign for Stead BLVD.

Off we go, slowing way down. Past the school, it's 15 mph or a ticket. Yellow buses turning, backpacks crossing the road, black uniformed students congregate at the stop light or play with cell phones. I follow a red RAM, exactly at 15 mph. The drying sun is already harsh. For now, it's calm.

Finally, up to 45 mph, I look for the last stop light by the Sinclair station and its green lizard tribute to fossil fuels. The left turn is soon. Now it's the industrial park, including the massive J.C. Penney warehouse, then yet another turn, straight in toward the main gate. I go left to Lot 3. It's rutty with new gravel.

Reno/Stead airport, the home of the National Champion Air Races, was built for the Army Air Force in 1942. During the war, its three runways were used for glider training and as a base for Air Transport Command. Decommissioned in 1945, it was reopened for survival and helicopter training. Today, it's a reliever airport for General Aviation and home to Army helicopters.

We're greeted at the fence by two long time security volunteers, both Sawbones fans. I give each of them a Sawbones sticker, and the one with the black mustache shows me he's wearing one of our old shirts.

Only a few steps inside, not far from the temporary tent hangars for the exciting Sport racers, I hear, "Tom, hey, brother!"

It's Chris Holder, the eastern U.S. sales manager for Concorde Batteries, a Sawbones sponsor. Sue and I see Chris every year at Oshkosh. He's already connected with Rick, our Crew Chief. A new battery is the works, maybe even by tomorrow. Networking! It's especially vital in aviation – air racing is no exception.

Trailer unlocked, I help set up for sales, for some fans arrive early. This is especially true of the pylon judges who spend long days in the desert with the jackrabbits, dust devils, and rattlesnakes. A pylon judge, who is a deputy sheriff and was injured in a confrontation with a gunman, is back asking about donations for the judges' party. We always contribute. This time, besides the shirts and hats, Sue adds a Sawbones apron signed by Robin and Curt.

With the yellow sun still low in the east, a tall slender guy on a bicycle glides to a stop. It's John Preacher, an Atlanta based Delta A&P, who crews on a Cassutt called Heat Stroke. We were pall bears for Faribault WASP Liz Strophus. Liz was an inspiration to everyone she met. As she always said, "An airplane doesn't ask if you're male or female, it just asks, can you handle me." John and I have kept in touch since Liz's funeral.

Reunions are part of Reno. One amazing one was with retired Northwest Airlines Captain Larry Daudt. Larry flew with NWA from the Lockheed Electra to the 747. At Planes of Fame he flew the P-40N, P-51D, and P-63A. The P-51D and the P-63A are racing this week. A pit guest, Lynn Ojala, who flies a beautiful Christian Eagle, was a flight attendant with Larry. John Sinclair, Jim Dale, Rick Ranheim, Tommy Krueger, and Sue and I were all at Planes in the 1990's when Larry flew for us.

We also reconnected with our New Zealand pit mates. Full Noise, or the "Yak in the Box," arrived at Reno in a massive blue shipping container, to be assembled on site. Graeme, Ryan, Paula, and the other Kiwis quickly reestablished their Sawbones connections, including maintenance help from Rick. 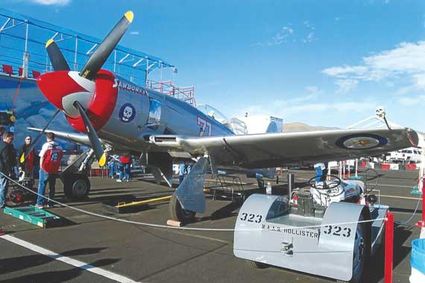 Sawbones rests in her pit. The operations trailer and store are behind her. Note the old Navy aircraft tug, which attracted attention from USN carrier veterans.

Early morning races feature the small, light Formula I and Biplanes to avoid the mid-afternoon "Winds of Reno." Not a song title, it's part of the local lore, the conditions everyone must adapt to as part of the high desert. It's a dry, dusty wind that affects the nose, eyes, and skin. Beware nose bleeds. As the wind gusts, dust devils dance with the pylons. Races sometimes get canceled due to high winds or crosswinds. Even the heavy iron is affected.

The blonde TSA lady comments as I check in, "I see they made you take off your glasses." She looks at my passport, then holds it up next to me.

"I wear my glasses all the time," I reply.

While I wait to board, I pull out my yellow legal pad to start writing before I forget the images I wish to use. My camera notebook is filled with scraps that might become sentences and paragraphs. Some go into the Sawbones' blog, others the article for the Flyer.

For now, it's time to go home. Maybe we'll have a tail wind.