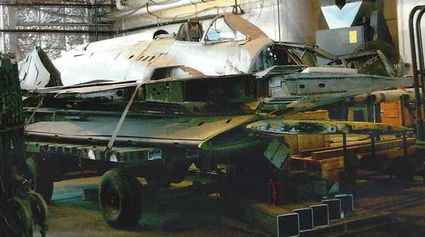 In 1946, the Army Air Force sent to industry a request for a "penetration" fighter able to escort bombers as well as perform ground attack. Three companies responded, McDonnell with the XF-88, North American with the YF-93 based on the F-86, and Lockheed with the XF-90. Of these, only the XF-88, modified to become the F-101 Voodoo, was produced.

Lockheed received an AAF contract on 20 June 1946 for two prototypes, serials 46-687 and 46-688. Initially, Lockheed had proposed a delta wing, but wind tunnel tests at the California Institute of Technology led to abandonment of this model and change to a swept wing. Built with heavier grade aluminum, 25 percent stronger than standard, the XF-90, was too heavy for the jet engines of the day. Tony LeVier made the maiden flight of the XF-90 at Edwards AFB on 3 June 1949. Only in a dive would the aircraft break the sound barrier. Its maximum level speed was actually slower than the North American F-86A in combat in Korea.

Although Lockheed proposed other engines than the pair of Westinghouse J34-WE-11's, it was clear that the XF-90, armed with six 20 mm nose cannons and carrying two 1000 pound bombs, would not meet requirements. It was just too heavy. Kelly Johnson, head of Lockheed's "Skunk Works" noted that "The XF-90 was the only aircraft to defeat the atom bomb." The second aircraft (46-688) survived three atomic blasts during 1952 at Frenchman's Flat, Nevada. Although damaged, the airframe survived and was discovered in 2003. After decontamination, it was transported to Dayton, OH, to the Air Force Museum, where I took this photo in 2008. In 1953, 46-687 was tested to destruction at the NACA's Lewis Center in Cleveland.

Only Gary Kuhn identified the XF-90. As he wrote, "The early 1950s were the peak days for prototype jets. My pals and I would write to manufacturers and airbases for 8 x 10 glossy photos. Years later I was told that the local FBI guy checked us out with the Junior High Superintendent." Can't top that story! Blue skies and tail winds.