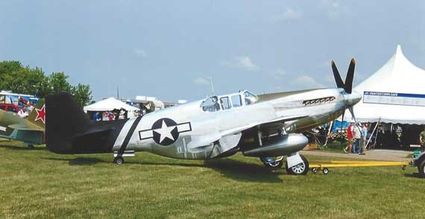 The railroad VFR traffic follows from Ripon, runs through little Pickett (unincorporated) to Oshkosh via Fisk. Pickett hasn't changed much in the 34 years I've been going to EAA. The gas station, grocery store, and Post Office are still in one building. The farm service business is next door. It's true, the corn canning plant has closed and the graveyard has grown, but that's about it.

One hundred year anniversaries are relatively new to aviation. This year was the Centenary of the Royal Air Force, formed by joining the Royal Naval Air Service with the Royal Flying Corps, an uneasy marriage resulting from the German bombing of London with dirigibles and Gotha and Zeppelin Giant bombers. The official merger date was 1 April 1918, making the RAF the world's first independent air force.

For this milestone, EAA gathered RAF aircraft ranging from a Sopwith Pup, a classic Spitfire, and a Gloster Meteor, the Allies' only WWII combat jet. Presentations during the week celebrated an often tumultuous 100 years.

Tied to the RAF anniversary was a commemoration of the end of World War I. Some times called the Great War or the War to End All Wars (it wasn't), WWI ended with an Armistice on the 11th hour of the 11th day of the 11th month in 1918. The Versailles Treaty planted the seeds for a second, greater, more devastating war.

Technology is accelerated by war and aviation grew as a result of the needs of ground and naval forces. A fascinating collection of WWI replica and real aircraft were tied down near the Red Barn representing the technological changes.

Eric Presten's Bleriot XI cut through the air behind a 60 hp Gnome rotary at 66 mph. At the other end of the spectrum, Kermit Weeks' Sopwith Snipe, with a 230 hp Bentley two row rotary, doubled that speed. Kermit ran the 100-year-old Bentley and a 200 hp liquid-cooled Mercedes straight six on his Albatross D.Va for us during the week.

Europe led the way during the Great War, with America far behind due to neglect, law suits, and isolationism. A Dayton-Wright built de Havilland DH-4 was displayed. Although the U.S. built DH-4 did see combat, it was an obsolescent British design.

After a long walk to the south end of the field, I spotted Bob Pond's old DC-3. Historians know it as Hap Arnold's C-41A staff transport that was based at Bolling Field, Washington, DC., during the war. When I asked Robin Tatman, a 747, 757, and 767 pilot about the bird, she replied, "You know this aircraft?"

Yes, I'd researched it in 1991 and written its history based on Aircraft History Cards, log books, FAA Airworthiness and Registration records, and a number of published sources. Would I send her a copy? Sure.

Then, she led me inside. While the exterior of the C-41A had been improved, the executive interior from the 1950s was intact, not much different from 1991!

As much as I love the aircraft, Oshkosh is always about people. As Paul Poberezny wrote, "Through EAA, I've learned much more about people than I ever have about airplanes."

I've known veteran Delta A & P and Air Force mechanic Kevin Hill for years. Kevin was featured in a Flyer article about the need for highly trained maintenance personnel.

Dean Alexander, retired from the Dayton, Ohio, branch of the Parks Department, is using his new freedom to travel.

Erik Hokuf and his crew from AirCorps Aviation in Bemidji, created another restoration masterpiece with P-51C Lope's Hope III, in the markings of WWII ace and Air and Space Director Donald Lopez. Their craftsmanship resulted in another Golden Wrench and WWII Grand Champion.

Mark and MariAnne Kolesar donate their Oshkosh time in the spirit of volunteerism.

Stan Ross, who serves with me on the Minnesota Aviation Hall of Fame Board of Directors, displayed his new technology business in the EAA Innovations building.

My favorite people moment happened on Saturday when I was getting ready to leave the field. A family of four, dad and two boys in pressed jeans and collared shirts, and mom in a long skirt and with her hair covered, were struggling to make sense of a map on their cell phone. Since I didn't need it, I dug my battered paper map out of my camera bag and gave it to them.

"This is our first time here. We've only got today. What should we see?" the dad asked.

I showed them the tram routes on the map and suggested it would be a way to get a flavor of the event.

The mother offered me a shy smile and suggested to her husband, "Maybe we need to come tomorrow, too."

That got instant agreement from her spouse. "Yes, we'll do that. Thank you."

As always, Oshkosh is about bringing others into our aviation family. It's about making aviation grow. It's what Paul would want. 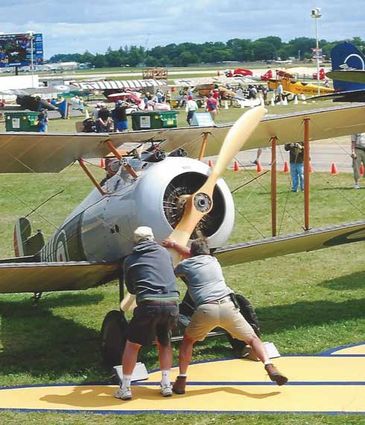