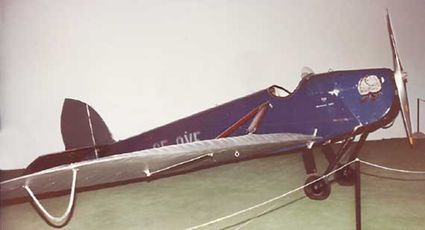 Ultra-light and light sport aircraft aren't new. Back in the early 1920's, The Daily Mail encouraged the design and manufacture of ultra light, inexpensive aircraft. One born of this competition was the DH. 53 Humming Bird. Originally fitted with a 750 cc Douglas motorcycle engine, the 524 pound Humming Bird debuted in October 1923. Later, powered with the 26 hp Blackbourne Tomtit and other engines, fifteen were produced, eight for the RAF. Three went to Australia, one to Russia, and one to Czechoslovakia.

The Air Ministry ordered six (J7268 to J7273) for use as communications aircraft in 1924. A further two (J7325 and J7326) followed for tests with the dirigible R. 33. With a complicated hook mounted behind the engine, this pair were used in a series of experiments to launch and recover aircraft from the 643 foot airship. On 15 October 1925, Squadron Leader R. A. de Haga Haig made the first successful launch from the R. 33 in J7375. After launching, he dove the DH. 53 to start the engine. After the Tomtit engine fired, he performed two loops, then hooked back up to the airship. A later test was made with Gloster Grebe fighters. Royal Air Force interest in the Humming Bird ended in 1927, when they were struck off charge and passed on to civilians. The DH. 53 had a top speed of 73 mph and a range of 150 miles. One of the early models flew an amazing 59.3 miles on only a gallon of fuel. Not bad for 1923.

No intact original example of the DH. 53 survives today. The prototype, G-EBHX, survived with the Shuttleworth Collection for many years, but was destroyed in a crash. The Humming Bird in this photo, a replica built by S. N. Green of Calgary, was registered CF-OVE. It first flew behind a 40 hp Continental A40 engine on 7 May 1967. I shot this picture at the Western Development Museum, in Moose Jaw, in August 1989.

Wayne Muxlow of Minneapolis is this month's winner.