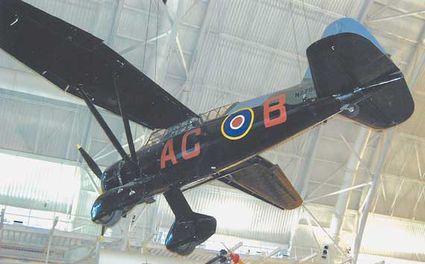 Although recognized as a maker of helicopters today, Westland started in the 19th century as a manufacturer of farm equipment. During WWI, Ernest Petter produced engines and airplanes at Westland Farm, the doors opening on 3 April 1915, as Westland Aircraft Works. Post-war Westland designed and built the Wapiti and Wallace general purpose biplanes based on the wartime de Havilland DH 9A.

Designed to RAF Specification A.39/34, by a team led by Arthur Davenport, the Lysander, named after the Spartan military commander, made its maiden flight on 15 June 1936 at Boscombe Down wearing RAF serial number K6127. It was the first monoplane built for RAF Army Cooperation squadrons, replacing the Hawker Hector biplane. A sitting duck during during the German invasion of France, it was relegated to towing targets and gliders and air sea rescue. The Lizzie's outstanding STOL capabilities were ideal for agent insertion and recovery in occupied Europe. Operated by No. 138 and No. 161 Squadrons, Lysanders flew over 400 missions equipped with a long range tank and side ladder. Total production by Westland was 1539 aircraft, while National Steel Car produced 225 at Malton, Ontario. Post-war, four Lysanders were used as crop dusters in Alberta by Westland Spraying Service.

The Lysander in this 2012 Dulles photo was taken on charge by the RCAF as a target tug on 24 April 1942 as #2346, powered by a Bristol Mercury radial. It was struck off charge on 15 January 1947. Ernie Simmons stored 2346 on his farm until 1969. Dwight Brooks later restored it to airworthy condition as N7791. It flew on 3 July 1974 in the markings of No. 138 Special Duties Squadron, based at Tempsford, Bedfordshire. Donated to the NASM, it was displayed at Dayton, but now hangs at the Udvar-Hazy Center.

Ten Flyer readers correctly identified the Lizzie, this month's winner being Michael Johnson of Minneapolis. Thanks to everyone. Fair skies and calm winds!