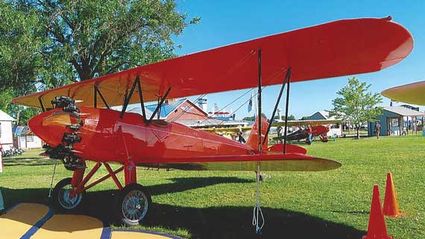 Lloyd Stearman started with Matty Laird in Chicago, moved to Wichita, and later worked with Walter Beech and Clyde Cessna at Travel Air. In 1926, he set up Stearman Aircraft Company in Venice, CA, returning to Wichita in 1927. His company produced practical biplanes for sport, passengers, mail, and training.

The classic C-3B, certified under Approved Type Certificate #55 of July 1928, appeared with a 220 hp Wright J-5 Whirlwind nine-cylinder radial. A three seater, it had the traditional welded steel tube fuselage with fabric covering with wooden, fabric covered wings. Early models had the prop spinner as seen in this Oshkosh 2017 photo. Some were configured for Edo floats. Capable of a maximum speed of 126 mph and a range of 620 miles, they served well for training and airmail work, later being converted to crop dusting. Joseph Juptner (Volume 1) lists the factory price of the C-3B as $8970. He describes the airplane as "a complete charm to fly, with spirit and determination, yet well-behaved..." Over the production life of the C-3, it also was powered by the Curtiss OX-5, Hispano-Suiza, a Siemens-Halske, and the Menasco-Salmson, in addition to the Wright J-5.

Our May mystery, NC8811, was delivered from the Wichita plant on 8 May 1929 to Wayne Fisher of Los Angeles with the Wright J-5. It served as a crop duster with a P & W R-985 from the mid thirties until 1954. It was rescued by Al Kelch in 1979 and restored by Kent McMakin at Brodhead Airport, once again with the Wright J-5. It is currently based with the Kelch Aviation Museum. At Oshkosh 2017 it was crowned the Outstanding Silver Age Open Cockpit Biplane.

I thought this would be easy, but only two readers nailed it. Eldon Boose of Blaine is this month's winner. Eldon knew it was based with the Kelch Museum. Bob Eckstein also knew the C-3B. Gary Kuhn came close, thinking it was a Model 4. Fly safe. Blue skies and fair winds.