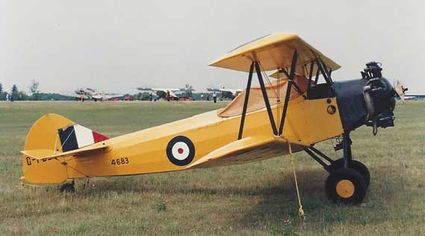 Major Reuben Hollis Fleet, U.S. Military Aviator No. 74, founded Consolidated Aircraft Corporation in May 1923. Fleet believed in making aircraft simple and safe, and produced a series of training biplanes for military and civilian use. On 25 March 1930, he formed a subsidiary company, Fleet Aircraft of Canada at Fort Erie, Ontario. Later, as Fleet Aircraft, Limited, Fleet produced two seat radial engined biplanes for the Royal Canadian Air Force and for export. Most, like the Model 2 and the Model 7 Fawn, were powered by five cylinder Kinner air-cooled radials.

Many later Model 10s were for export, but the Model 16B, with 125 hp Kinner B-5 was produced for the RCAF's Elementary Flying Training Squadrons and the Commonwealth Air Training Plan. Ordered for the RCAF in July 1939, the Finch II, often with an enclosed canopy for winter flying, was delivered to 12 Elementary Flying Training Squadrons. It was rugged, fully aerobatic, and joined the DHC-82C Tiger Moth and Fleet built Fairchild PT-26 Cornell, training thousands of Canadian and Commonwealth pilots. Most were retired by October 1944 replaced by Cornells, but some remained on charge into 1947.

RCAF 4683, in this 1985 Hamilton, Ontario, photo, was taken on charge on 9 November 1940 and served with No. 22 Elementary Flying Training Squadron at Ancienne Lorette, Quebec. EFT Squadrons gave 50 hours of basic flying instruction over an eight week period. 4683 was struck off charge from the RCAF on 28 June 1947, appearing on the Canadian Civil Register as CF-GDM, and later as C-FGDM. It was cancelled in 1991 and registered in the United States as N116TR. I photographed it again at Oshkosh in 1994. By 30 October 2013, it had been deleted from the USCAR.

Barb Frost of LeSueur, MN, who owns Fleet Finch N237D, is the eagle-eyed winner for March. There were several others who were not fooled by this one.