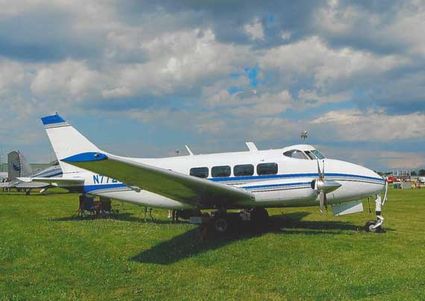 Jack Riley formed Riley Aircraft Corporation in 1952 to improve the performance of existing production aircraft. He converted the North American/Ryan Navion to twin engines, later selling the conversion rights to Temco, followed that with upgrading Cessna's 310 series as the Riley Rocket, and continued with conversions of Cessna 314, 340, 414, and 421 twins. In 1963 he upgraded the de Havilland DH. 104 Dove, originally first flown in September 1945, to the Riley Turbo Executive. A major conversion of the four engined de Havilland DH. 114 Heron as the Turbo Skyliner came in 1967.

The Riley Turbo Executive 400 flew with a pair of 400 hp turbo-supercharged Lycoming IO-720 eight cylinder air-cooled engines driving Hartzell three blade propellers. Further modifications included a revamped flight deck, flush riveting of much of the wing, a revised spar, an air-stair door, updated cabin interior and lavatory, and a sleek swept back vertical tail. The changes raised the maximum cruising speed from the Dove's 230 mph to almost 300. The Riley 400's range improved from the Dove's 880 miles to 1290 miles. At least 17 conversions were made in the United States by Riley at Ft. Lauderdale, Florida, and others were done by McAlpine Aviation Ltd., at Luton, Bedfordshire. A turboprop model with 562 hp Tubomecca Astazou engines was also offered.

The Riley in this Oshkosh 2017 photo began life as a DH. 104 in 1956 with six cylinder Gipsy Queen engines and was delivered to Venezuela. It was converted by Riley in 1966. Registered N772S upon return to the United States in 1969, it served a number of owners until landing with Don Marcrum of Vestavia, Alabama, in 1993.

Fifteen people correctly identified the Riley, including February's contest winner, Gary Kuhn, who likes Rearwins and Tom Anderson who remembers seeing the old DH. 104 flown by Illini Air in 1957 when he worked for United Airlines at O'Hare in Chicago.

Blue skies to all!