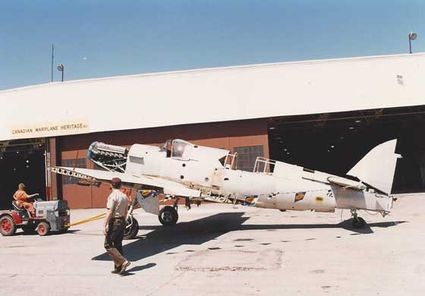 Richard Fairey began as a maker of flying model airplanes. By July 1915, Fairey Aviation Co. began construction of license built Short biplanes. From then on, Fairey was known for design and manufacture of aircraft mainly for the Royal Navy. Famous designs included the Fairey IIIF, the Flycatcher fighter, and the WWII Swordfish and Albacore torpedo bombers. The RN's first eight gun fighter was the Merlin powered two-seat Fairey Fulmar of 1940. Although large and slow, it did well in the Mediterranean against bombers.

The Fulmar's replacement was the Griffon engined, two-seat Firefly, that first flew on 22 December 1941. With four 20 mm cannons and a range of over 1000 miles, the Firefly entered service in March 1943 and saw action against the Tirpitz in Norway and for ground attack in the Pacific. Post-war versions with more powerful engines saw combat in Korea with the Royal Navy and the Royal Australian Navy. In 1954, Fireflies were in action in against Communist forces in Malaya. Later variants were optimized for anti-submarine operations and flew until replaced by Fairey Gannets in 1956. In addition to the UK and Australia, Fireflies served with Canada, Denmark, Ethiopia, India, the Netherlands, Thailand, and in civilian hands with Sweden.

This 1986 photo, taken at the Canadian Warplane Heritage in Hamilton, ONT, shows WH632, a Firefly A.S. Mk. 6, delivered to the Royal Navy on 3 May 1951 and assigned to No. 1840 Squadron, Royal Navy Volunteer Reserve. On 7 June 1953 it was transferred to the Royal Australian Navy and shipped aboard HMAS Sydney to Australia where it was used as a maintenance training airframe. After museum display, it was sold to the CWH in June 1978 and restoration as C-GBDG followed. Today it flies in the colors of No. 825 Squadron that operated from HMCS Magnificent.