Little Horse being fueled. Once with Paul Ehlan in Minnesota, Race #22, was own by Allan Miller to 1st place "They Race Airplanes?" in Sunday's Bronze race at 312.131 mph.

It was oh-dark-thirty and we’d just left the VW at the Park-N-Fly. Sue had a small shoulder bag and I had my camera bag.

“It went ahead on the semi.”

“We’re part of an air racing team, heading to Reno for the races.”

For as long as the Reno races have existed, they are not as well known to the public as one might expect. In the Golden Age of Air Racing, from 1929 to 1939, speed in the air was a major attraction nationwide. Today, mention air racing and someone might say, “Oh, the Red Bull Races?” which is not really air racing, but more an aerobatic time trial. The world’s fastest motor sport is sadly under promoted.

Our first leg from MSP to Denver was mostly quiet – a bit of early turbulence being the only excitement. After a quick sandwich in Denver, the second leg to Reno was in ahead of schedule. Once at Reno-Tahoe International, we headed for the Alamo rental car desk.

“Sawbones crew? I just had another of your guys up here a couple days ago.” James scrolled through something on his computer. “Brent? Yea. I was planning to go again this year, but a buddy got me two tickets for an Indy style race. Couldn’t pass that up.”

The paperwork went quickly, unlike last year with a different company. Then James showed me on a map the quickest way to get from the airport to Pepper Mill and the best way to commute from the hotel to Stead each day. His route, via Moana Lane, served us well all week, providing easy access to and from the freeway. Good customer service.

Although the races don’t officially begin until Wednesday, things start early. Set up the pit, aircraft tech inspection, Curt qualifying at a hair over 406 mph, and Sue making a trip to RARA to get the sales permit.

It starts early for me too.

Retired Navy Captain Gus Gudmunson, a native of Minneapolis, had flown behind the R-3350 in Skyraiders at the beginning of his career, then moved on to jets like the A-4 and A-7. After tours in Viet Nam, he returned to the States as a flight instructor before flying dissimilar air combat in the F-14 and F-16.

“The F-14 wasn’t much of a dog fighter,” he commented. “It was too big and too slow in a turn. The F-16 was a close in knife fighter. You could really tangle with that.”

Gus looked affectionately at Sawbones’ R-3350 engine. “Still, there was something about the simplicity of the Skyraider. Big load, long range, and a great, reliable engine. That old 3350,” he sighed. “I trusted it.”

Tuesday, things got rather crazy. Down the row from us were a bunch of totally amazing characters from New Zealand, led by pilot Graeme Frew, flying a Yak-3 named Full Noise. The aircraft had been shipped to the states, assembled, and flown to Reno. A special race engine was part of the package.

Unfortunately, they came without what one might call “infrastructure.” Lack of tools, a tug - but strong on perseverance, pluck, and downright guts. Rare Bear provided the loan of its racing trailer. Our Crew Chief, Doug Weske loaned tools, a floor jack, and an air compressor, and other teams chipped in, too.

The mid-Tuesday afternoon sky had changed from ominous to threatening, to, depending on your viewpoint, a great fireworks show or freaking scary, especially since Strega was out on the course qualifying. The wind switched 180 degrees and the temperature had seriously dropped.

The Kiwis were valiantly working to change the Allison engine on the Yak. Its tail was up on an oil drum that had started life as a trash can. A borrowed fork lift stood by, just in case. The engine plumbing was being unhooked and the prop and header tank were lying on the ground.

Japanese photojournalist and artist, Miki Matsuda was standing with me. He eyed the sky with calm disinterest and asked me about the greenish liquid streaming from the engine, first onto the ramp, then into a white bucket.

“Coolant,” I replied. More thunder and some “artistic” cloud to ground lightning punctuating my words.

As it got colder and windier, good sense prevailed and we both headed for cover, me to Sawbones’ trailer, Miki toward Lot 3.

Help came later that night when another racer offered them hangar space to complete the engine change. After that, Graeme and crew were, to me, the story of the week. Unranked, Graeme won Bronze Heat 1C to move to Silver. He then won Silver Heat 3B at over 345 mph and advanced to Sunday’s Gold Finals. The Full Noise crew joined Sawbones in our pit one night for celebration and during the Gold race, members of their team joined us again. Curt and another veteran, Sherm Smoot, tutored Graeme on handling the turbulence behind the park, especially, four radial engined Sea Furies. It was racing at its best. We couldn’t have asked for a better group of pit mates. From dead last, to flying in the Gold. A great story.

Like Oshkosh, Reno is about people. Early in the week I met Lockheed Bob.

“Yup, at the Cleveland Air Races. I was just a kid with a camera.” Lockheed Bob adjusted his hat and leaned his black cane against the concrete barrier. An air band radio was hooked to his belt, emitting a faint hiss. “Sounds like a stuck mic,” he sighed.

“How about Cook Cleland,” I asked.

“Oh, yeah. And Dick Becker. Somehow Cleland talked the Navy out of those Super Corsairs. Know how Mantz got those high speeds in his Mustang in the Bendix?”

“Higher and faster than anyone else?”

“Yeah, but he didn’t fly a direct course. He told me, you know, he’d fly north out of LA, way north to pickup the jet stream. Saved gas, gained speed, flew more miles, and came into Cleveland over Lake Erie.”

Bob had been there. I’d only read about it. I’d seen both of Mantz’s racing Mustangs as museum pieces. Bob had seen them fly. He shuffled his feet a bit, the tarmac not doing his 85 year old legs much good.

“Got this picture...” he reached into his left shirt pocket. “You know, everyone gets down on Polaroid pictures,” he moved his black cane so it wouldn’t fall. “After all these years, it’s still a pretty good color. Do you know who this is? I took it with a Polaroid.”

“Know who this is?” he repeated with mischief in his eyes.

“Damn!” he laughed. “You’re the only one who recognized him!”

It was that way all week. Lockheed Bob would make his rounds swapping stories and hinting at secrets. 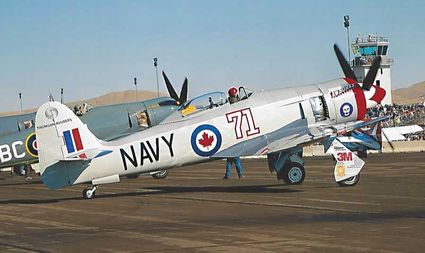 Paul Mantz, Frank Tallman, Charles Tucker, Steve Wittman, “Tiger,” the Skunk Works – Lockheed Bob had been there. After Sunday’s Gold Race, the air was strangely quiet and the pits were full of celebrations. I was standing by the aircraft tug looking out over the course, listening to what was now silent. Bob stopped and held out his hand.

“You know, all these years, so many races, I don’t really care who wins, just so it’s a clean race and everyone is safe.” His old eyes still sparkling with the excitement I imagined they must have had during the Post-War Cleveland days. “It’s an event, sure. But it’s really all about people. It’s what we share. Thank you.”

In the darkened cabin on the flight home I thought about those words. About the people I see each year at Reno and the new ones I meet. About the bonds that hold air racers together. About how lucky I am to learn from those with great things to share.