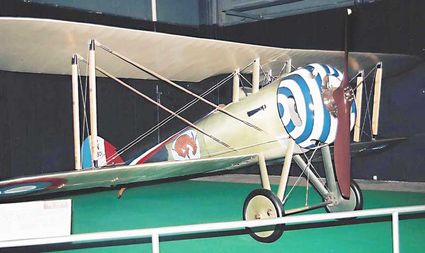 Edouard Nieuport (later changed to Nieuport) began building high speed monoplanes in June 1910. He was killed on 15 September 1911 and Henri Deutsche de la Meurthe with Gustave Delage as designer continued the name, but moved to building a series of over 10,000 V-strut sesquiplanes with rotary engines that became the backbone of French and Allied fighter squadrons. Delage broke the pattern in June 1917 with the Nieuport 28. It used untapered wings, twin Vickers guns, and a circular section fuselage with a rounded tail. The 28 was light, quick, and accelerated well, but suffered two faults. The top wing tended to shed its fabric in violent maneuvers and the Gnome rotary engine was prone to fuel line fires in the air. The Aviation Militaire had found its fighter in the SPAD.The United States had not, so 297 were supplied to the American Expeditionary Force, equipping the 27th, 94th, 95th, and 147th Aero Squadrons. Deliveries began in March 1918 and combat began in April. Douglas Campbell and Eddie Rickenbacker began their ace careers with the 28, but ace Raoul Lufbery and Quentin Roosevelt (Teddy Roosevelt's son) were killed in them. Beginning in July 1918, the AEF replaced its Nieuports with SPAD XIII's.

A number of Nieuport 28's were brought to the US after the war and used by the Army as trainers and by the Navy flying from platforms on battleship turrets. In civilian ownership, they flew in Hollywood productions of The Dawn Patrol and Men with Wings. The 28 in this Air Force Museum photo, N8529, was part of the Tallmantz collection before being acquired by Kermit Weeks. With Weeks, it was incorrectly rebuilt with Ceconite, fiberglass, pop rivets, and vinyl. It came to the Air Force Museum in a trade and was restored by museum personnel to the correct specs and retains wood and hardware from an original Nieuport 28. Today it appears in the colors of the 95th Aero Squadron.