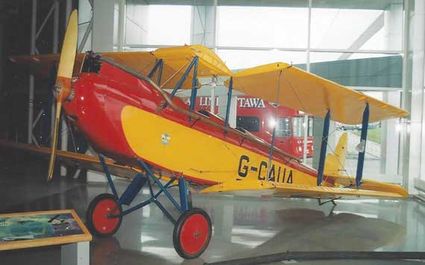 The prototype Moth, G-EBKT, was first flown by Geoffrey de Havilland at Stag Lane on 22 February 1925, powered by a Halford designed Cirrus I engine of 60 hp. The name Moth was bestowed on the two-seater biplane in reference to de Havilland's reputation as a lepidopterist.

Over its production life, the DH-60 was powered by Cirrus inlines of 60-90 hp, the 75 hp Genet radial, DH Gipsy inlines of 100 to 120 hp, and the 130 hp Gipsy Major inline. Aircraft were manufactured for civilian and military operators in the UK, Finland, Australia, France, Norway, Canada, and the USA. American built DH-60's, licensed under Approved Type Certificate #197 of August 1929, were built by The Moth Corporation, of Lowell, MA. The famous American aviatrix Laura Ingalls once flew 980 continuous loops in a Moth and followed that feat with another flight where she did 714 continuous barrel rolls!

The aircraft in this Ottawa 1985 photo is a de Havilland DH-60X, the "X" referring to the split axle landing gear. The DH-60X first appeared in 1927 powered by a 90 hp Cirrus III inline, and was certified in the UK on 14 April 1927, with further certifications for seaplane and amphibious versions. The basic DH-60X has a top speed of 95 mph, cruises at 85 mph, and weighs 890 pounds empty. In Canada, Moths were used by the Ontario Provincial Government for forestry operations, operating on floats and skis.

G-CAUA was delivered from Stag Lane on 7 August 1928 and served with International Airways of Canada, Ltd. and Canadian Airways Ltd., before being put into storage by its last owner, C.F. Burke in 1942. It was donated to the Canada Aviation and Space Museum in May 1962 and restored for display.

One of the finest books on the Moth series is De Havilland Moths in Detail by Stuart McKay (Herridge & Sons, 2010). Blue skies, fair winds, and safe flying.

This month's winner is Peter Korll of Plymouth. Other correct responses came from Timothy Aanerud, Joe Connell, Bob Eckstein, David Johnson, Dave Lundgren, and Bob Heaviland who has an American Moth fuselage and fuel tank in his shed.