Oshkosh: Where to Begin? 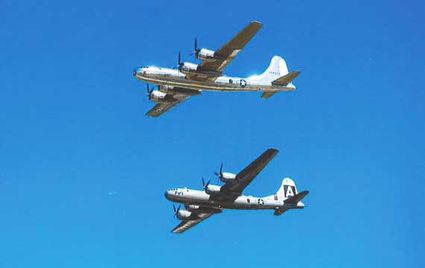 "Doc" and Fifi" fly together Saturday. They are the world's only airworthy Boeing B-29 Superfortresses. This is a sight warbird fans never thought they'd see.

It wasn't a question and I wasn't sure if it had implied age or I just looked like an Oshkosh veteran.

"This is our first time. We've had it on our bucket list for years. Now we're finally here."

The wind ruffled the umbrella shade over the yellow picnic table by the Subway near the Vintage Red Barn. They were about our age, a couple from Arizona, much farther away from home than we were.

"What do you recommend we see?" the wife asked. "We've got all week."

Not an easy question to answer. It's impossible to see it all. The best I can do is a few highlights.

When we reached Boeing Plaza Sunday afternoon after registering, attaching the wrist band, and getting a parking pass for the week (saves time, not money), the first things I noted were the tail of the B-52H and what looked like a misplaced, scorched Midwest farm silo. The silo turned out to be Amazon CEO Jeff Bezos' New Shepard reusable, 55' tall booster rocket, designed for space tourism. To date, the New Shepard has flown five times, each time making a safe vertical landing on retractable legs.

A model of the six-person capsule was open to the public to try out (I didn't). It's designed to reach the 100-kilometer mark and give riders a chance at four minutes of weightlessness. The whole flight would last about 11 minutes. The booster would land under its own power, while the capsule will parachute back to Earth. Cost? More than I could afford. Actual manned flights could start within two years with a new, New Shepard rocket.

From the new to history

Minnesota contributed two B-25s, those of the Minnesota wing of the CAF from South St. Paul (Miss Mitchell) and C & P Aviation of Anoka County Airport (Lady Luck). It's important to point out that Mid-Continent Airlines' engineering department and maintenance facilities at Wold-Chamberlain Field fitted Doolittle's B-25s with fuselage and bomb bay tanks. Two Minnesotans were aircrew. Wayne Bissel of Walker, Minnesota, was the bombardier on aircraft #9 and Roy Stork, from Frost, Minnesota, was a co-pilot on aircraft #10.

Speaking of history, I had the great pleasure of meeting Jerri Bergen, the president of the American Aviation Historical Society. AAHS was founded over 60 years ago and publishes the fine scholarly Journal four times a year. I've been a member for years. The head of the Minnesota Aviation Hall of Fame, Noel Allard, has published numerous articles in the Journal, his latest one being about his Cold War service with the Ground Observation Corps. He served as a teenage plotter in the Minneapolis Filter Center. I had a nice talk with Jerri and welcomed her on her first visit to Oshkosh. Turns out, she also works Reno. Go Sawbones!

Many aircraft firsts took place this year. The Navy's new Boeing P-8A Poseidon debuted. It's based on the Boeing 737 airframe and is designed to replace the venerable Lockheed P-3 Orion. The second airworthy B-29, 44-69972, Doc not only made its first Oshkosh appearance, but flew in formation with Fifi of the CAF. Add a B-17, a half dozen B-25s, and the USAF's current inventory Lancer, Spirit, and Stratofortress, Saturday was a superb salute to bombers.

Not to be outdone in showing off its new technology, the Royal Air Force sent one of its new Airbus A400M Atlas transports. With sweptback wings, four eight blade propellers driven by 11,000 hp turboprops, and capable of carrying 116 troops or 25 tons of cargo, the Atlas is designed to enhance the RAF's strategic and tactical transport capabilities.

Minnesotans were well represented. Aircorps Aviation of Bemidji, Wings of the North, Fagen Fighters Museum, the Minnesota Wing of the CAF, and the American Aviation Heritage Foundation were all present. Terry Baker and the crew from Blaine brought the newly restored Vultee BT-13A, serial number 42-88675, destined for the WASP Museum n Sweetwater, Texas, for display and inclusion in the Warbirds in Review forum. Inspired by Liz Strofus, the Faribault WASP, the AAHF crew restored the BT in slightly less than five years. Flight testing was done by Ingemar Holm.

Some personal highlights included seeing three Bell P-63 King Cobras fly together, making a return trip to the Seaplane Base on a beautiful morning, and taking a pontoon boat tour of the mooring area with a very knowledgeable seaplane pilot, seeing the US Navy's oldest active aircraft, a de Havilland Otter that was delivered in 1956, served in Antarctica and currently is used by the Navy's Test Pilot School, and connecting with Jim Dale, who first handed me tools in 1990 at Planes of Fame. I'm still working restorations and maintenance 27 years later. Thanks, Jim!

We took time to admire Tony Phillippi's pair of rare Howard 500s, Grumman Albatross, and one of the greatest bush planes ever, the Noorduyn Norseman. The Collings' Foundation's newly restored Spitfire IXc was an award winner and crowd pleaser. Eleven Minnesota aircraft and owners/builders were rewarded with EAA plaques for their efforts (see separate list). American Wings Museum's Cessna O-2 Skymaster, over a decade in restoration, was given a Judhe's Choice Award. I was particularly pleased, as I'd helped with the rebuild. The crew overcame problems finding parts, overhauling systems, and getting the paperwork sorted out.

"What would you recommend?" the young fellow asked. His father was trying to refold the map of the EAA grounds. It was later in the week after we'd met the Arizona couple. It was hot and we had some shade from a pop up tent in the Warbird area.

"Have you seen the Seaplane Base?" I asked.

"There's a Seaplane Base?" he responded. "I didn't know that. This is our first time here and we've only got two days."

I remembered my first trip to Oshkosh. It was a one day charter from Beech Aero at Flying Cloud. We took a Bonanza and Duchess flown by the FAA examiner Don Huseth and a flight instructor from India. Sue and I rode with Don. He'd been our check pilot. One day. Where to begin? 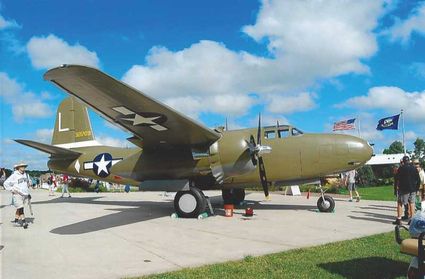 Rod Lewis's Douglas A-20J won Warbird Grand Champion – WWII. 7385 Havnocs/Bostons were built by Douglas and Boeing and only this one, N747HS, still flies.

I learned two things from that charter. I had to go back the next year (and have for over thirty years...) and that, no matter what, you can never absorb it all. Find a few things you really want to experience and concentrate on them. And remember, no matter where you are on the field, there are people who share your love of aviation and will talk.

Sue and I shared lunch tables with people from Missouri, Texas, Indiana, and Arizona. While touring the Homebuilt Building, we met a young woman from Alabama, who was not only on her first visit to Oshkosh, but was volunteering. She admitted she knew little about aviation when the week began, but in a short time fell in love with all the EAA members who'd shared their knowledge, experience, and love of aviation with her, even though she was a new comer.

Why does this work? Because we speak the same language and are on the receiving end of the legacy of Paul Poberenzy's sense of community. As Paul wrote, "We are a family – a family brought together by aviation."